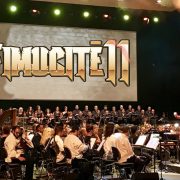 The International Film Music Festival of Tenerife (FIMUCITÉ) held its 11th edition last September (from 23 to 30). Gori Martinez was there covering the last days of the festival for SoundTrackFest, and tells us in this article about the concerts of that weekend.

The concert was held at 8:00 pm at the Guimerá Theater which was full of public, where the Fimucité Youth Symphony Orchestra conducted by José A. Cubas offered a concert of great quality, bearing in mind that it is formed by young people of the Conservatory of the Canary Islands and Santa Cruz of Tenerife.

The concert was long and the pieces had the same arrangements that are made for professional musicians, without special reductions for them being younger musicians.

The concert began with the music of The Witcher III and the presence of its composer, Polish Marcin Przybylowicz. The Witcher III is a videogame developed in Poland that has been a sales success throughout Europe, and its music had special arrangements for the concert.

At the beginning of the second part, the Fimucité Antón García Abril Award was given to the record producer and responsible of Tadlow Music, James Fitzpatrick for his work in the preservation of the heritage of film music.

At the end of the concert the director of Fimucité, Diego Navarro, dedicated some words and thanked the young musicians and the conductor for a great work.

After a big ovation from the public, the concert ended with an encore of Taras Bulba, and with a later session of photos with composers and fans in the hall of the theater.

The concert was held in the Auditorium of Tenerife at 8pm, which was full of fans, most of the area, but also many SoundTracks fans from other parts of the country like Catalonia, Asturias, Castilla y Leon or Baleares.

The evening was in charge of the Orquesta Sinfónica de Tenerife conducted mostly by Eímear Noone, but also with the participation of Trevor Jones and Ramón García Soler as guest conductors. In addition there was the presence of the Tenerife Film Choir with Javier Jonás Diaz like choirmaster.

The night began with the themes of The Lighthouse of the Whales and El Olivo by composer Pascal Gaigne conducted by Ramón García Soler.

Following the Spanish Critics Choice Award was presented to Pascal Gaigne as the best Spanish film composer of the year by Miguel Ordoñez, chief editor of ScoreMagacine. Pascal Gaigne could not be there to collect the award for professional reasons but sent a thank you video and apologized for not being able to attend the festival.

Next the Irish composer and conductor Eímear Noone appeared on stage, who received the baton of a character disguised for the event. Theatrical and energetic, Eímear left her personal touch in all the pieces she conducted, which had the participation of the Tenerife Film Choir with their extraordinary voices.

Throughout the concert, videos and images of the films were screened synchronously, accompanied by light effects throughout the Auditorium.

The theme World of Warcraft, composed by Eímear Noone, had a very original staging as it was played along with several additional musicians and singers, who appeared and joined the musicians who were already on stage, so that the piece ended up being interpreted by more than one hundred musicians.

The first part, which lasted a total of two hours, ended with five pieces of Highlander of Queen and Michael Kamen, a world premiere that was accompanied by the voice of the singer Cristina Ramos, with a spectacular costume.

At 10:30 pm the second part of the concert began, again with Eímear Noone on stage and The Dark Crystal theme by Trevor Jones, where the orchestra was accompanied by a choir soloist and a women’s choir.

For the next piece, Excalibur, six musicians appeared with medieval instruments and clothes according.

Then Trevor Jones himself went on stage to conduct several songs from Merlin soundtrack.

Next there was a pause, as Trevor Jones received the Antón García Abril Award, which he picked up by thanking all fans of film music, unable to contain the emotion and almost to the point of crying.

The concert continued with Willow, conducted again by Eímear to later move to five songs of Conan the Barbarian, with some choirs of incredible voices.

After a big applause for a long but enjoyable concert, a song sung by Cristina Ramos from the film Beowulf came as an encore.

At the end of the concert, all the participants appeared again on the scene, receiving great ovations from the audience, even though it had been more than four hours since the beginning of the concert.

One more night the concert was held at the Auditorium of Tenerife at 8pm, an auditorium that was not full like it was the day before and where many empty seats could be seen. Apparently the concert didn’t get as much expectation from the general public as the previous one, although the fans of film music were very excited with it.

The night began with the ceremony of the Fimucinema 2017 awards, where the award for the best song was given to Josué Vergara for the song Sonríe, who received it from the hands of the composer Richard Bellis. Josué was the only award winner to attend the ceremony.

Alex North Award for Best Original Score in the category of feature films:
Amano Manish for the film “Rebellious Flower”

FIMUCINEMA Award for Best Original Score in the category of documentaries:
Mina Petric for the documentary “The Last Ice Hunters”

FIMUCINEMA Award for Best Original Score in the category of short films:
Nami Melumad for the short film “Luminaries”

Going back to the concert, the evening was performed by the Orquesta Sinfónica de Tenerife conducted by Diego Navarro and presented by Ana Molowny and Magdalena Miska-Jackowska, a Polish journalist and presenter of the Krakow Film Music Festival (Krakow FMF). In addition the concert also had the Children’s Choir of the Professional Conservatory of Music of Santa Cruz de Tenerife with Juan Ramón Vinagre as choirmaster.

Before performing each of the pieces, an English quotation from Stephen King‘s book related to the film appeared on the screen, which was being written by the keyboard of a typewriter and narrated at the same. The themes were also accompanied by images and videos synchronized with the music.

In the piece of The Mist there was a song performed by Cristina Ramos, with arrangements by the composer and orchestrator Nikiforos Chrysoloras.

In the piece Nightmares & Dreamscapes, when the scene of the elevator arrived, the theme was interpreted and the original sound of the film was added, synchronizing images and music.

These two pieces were the most applauded by the public, along with the suite of IT by Richard Bellis, present in the hall and that kindly received the applause.

The second part of the concert started with the emotional memory to the recently deceased composer Daniel Licht by Diego Navarro, where he was posthumously given the Fimucité – Antón García Abril Award. At that moment a video was shown on the screen, where composer Cliff Martinez presented the award to Daniel’s widow and she expressed her gratitude to the festival.

The evening continued with the theme of The Shining, where the girls from the Children’s Choir of the Professional Conservatory of Music of Santa Cruz de Tenerife participated by giving voice to the twins of the film, and synchronizing their voices asked the protagonist of the film if he “wants play with them”. Spooky!

Later, the music Stand by Me was performed by singer Fran León, a piece that also had the arrangements of Nikiforos Chrysoloras; a piece that delighted the audience.

At the end of the concert, an encore of the film Maximum Overdrive with the song of AC / DC was performed (arrangements of the composer and orchestrator Nikiforos Chrysoloras), which had the voice of a spectacular Cristina Ramos.

In short, a great concert, which ended a great, varied and very enjoyable festival! 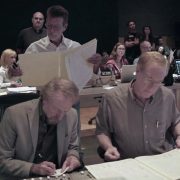 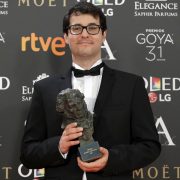 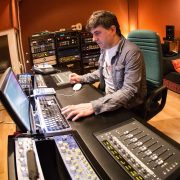 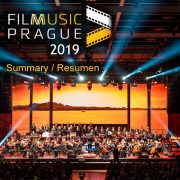 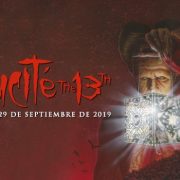 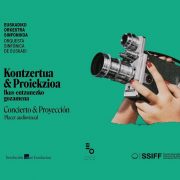