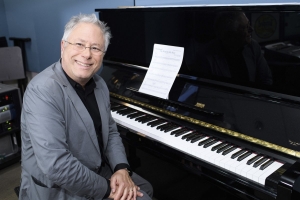 Multi-award winning composer Alan Menken, who already had 11 Grammys, 8 Oscars, and 1 Tony award, finally got his first Emmy, becoming the 16th person ever to achieve EGOT status (people who have won an Emmy, Grammy, Oscar, and Tony award).

Alan Menken received an honorary Primetime Emmy in 1990 for his work on ‘Wonderful Ways to Say No’ but this is his first competitive Emmy, received last Sunday at the Daytime Emmy Awards ceremony for the song ‘Waiting in the Wings’ (lyrics by Glenn Slater) for Disney Channel‘s Rapunzel’s Tangled Adventure.