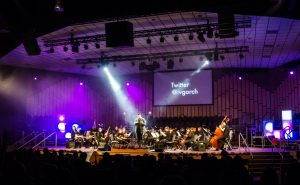 The EastSide Arts Festival in Belfast (Northern Ireland), to be celebrated 1-11 August 2019, will include next Wednesday, August 7th, a concert by the Irish Video Game Orchestra (IVGO), merging modern music with classical composition, to create new and exciting renditions of scores from video games, anime, film, and TV. The program will include pieces from Lord of the Rings, Game of Thrones, Hearthstone, Final Fantasy, Zelda, Pokémon, and more.

Previously the concert, the Irish Video Game Orchestra will hold an open rehearsal, giving players of any age an opportunity to sit along with the musicians and play through a few of the pieces.

Film music concert with the LA Phil and Gustavo Dudamel to open the Edinburgh...