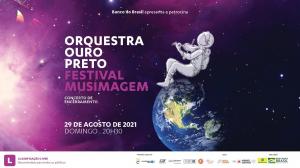 The Festival Musimagem Brasil ended its 7th edition last Sunday, August 29, with a concert by the Ouro Preto Orchestra conducted by Rodrigo Toffolo, dedicated to music that marked the history of national and international cinema, and which was broadcast free of charge on YouTube.

The concert included music from feature films such as “X-Men: Apocalypse”, “Superman Returns”, “Angry Birds 2” and “Hour of the Living Dead”. In addition, the repertoire included themes from Brazilian films such as “The Wall” by the honored Segio Saraceni, “The Legend of the Boto” by Wagner Tiso, “Beatriz” by Edu Lobo and “Claudia Case” by Remo Usai. The presentation proposed to unite music and technology, with an exhibition of scenes in augmented reality. In addition, the repertoire included themes written by composers who participated in courses and lectures during the Festival.

FesTVal 2021 – Conference – Music as a resource in television