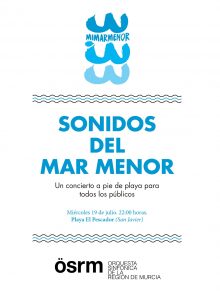 The Symphony Orchestra of the Region of Murcia (OSRM) under the baton of Virginia Martinez, will offer tonight a free film music concert for all audiences on the beach, called “Sonidos del Mar Menor”, which be encompassed in the summer activities of “Mi Mar Menor 3.33” cycle.

The stage of the concert will be placed on the sand of the beach, inviting the attendants to take their towels / beach chairs / mats to enjoy the evening. At the beginning of the event, bags will be delivered to introduce the garbage generated, which can be deposited at the end on established recycling points, thus obtaining a gift from the OSRM.