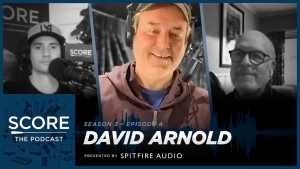 ‘SCORE: The Podcast’ continues its 3rd season with British composer David Arnold, who talks about the benefits of having his studio inside AIR Studios in London, why a record store clerk might be the reason he got his first James Bond film, how he wrote the theme from Independence Day in a dream, and the pressure of being music director for the 2012 Summer Olympics in London.