On Saturday, May 4th, Maestro Ennio Morricone was in Bilbao to conduct the first of the three concerts that he will offer in his visit to Spain (one in Bilbao on 4/5 and two in Madrid on 7/5 & 8/5), shows included in his last European tour before retiring from the concert circuit.

Here you have the summary of that evening from the hands of SoundTrackFest’s collaborators Felipe Múgica and Carmen Ruiz, illustrated with pictures taken by Gori Martínez. ¡Three points of view are better than one!

Having Ennio Morricone in Bilbao on his final concert tour has been a privilege that any film music lover, or just any music lover could not let go. Maestro Morricone hangs up the baton and this is a farewell. But it is a big farewell. The one he deserves!

First I’d like to point out that the venue (the Bizkaia Arena within the Bilbao Exhibition Center – BEC) is not the most appropriate place for a symphonic concert. The expansion of the sound not only is not adequate, but it is not even moderately acceptable. It is necessary, therefore, to amplify the sound so that those who are sitting further away from the stage can hear something, and this invariably causes bad situations that in no case are the musicians’ responsibility. There was some shrillness mainly in the trumpet and the flute, a rather unpleasant reverb, and moments when the sound of the instruments covered the voice of Dulce Pontes. But this is live music and these things happen. On stage we had the Talía Choir, the orchestra Roma Sinfonietta and Morricone conducting. The quality was assured. Two side screens helped the public to see the performers and Morricone.

Applause arrived from an enthusiast audience, even before anyone came on stage, at the moment when the beginning of the concert was announced. Then, the choir comes out on stage, followed by the musicians and the concertmaster. They tune the instruments and finally, in the midst of the general clamor, Maestro Morricone comes on stage.

The concert has around thirty pieces divided into different blocks. I have to say that I did not know a few of the pieces, and discovering them has been a very pleasant surprise and a true delight. Among them, I would like to highlight ‘The working class goes to heaven’, with an industrial sound in which you can hear the workers in the factories with violin interludes that I found very curious.

We couldn’t miss pieces from movies such as ‘The Good, the Bad and the Ugly’ with the soprano Susanna Rigacci, ‘Novecento’, ‘The Untouchables’, ‘The Man of the Harmonica (Once Upon a Time in the West)’, ‘The Hateful Eight’, ‘Cinema Paradiso’ and of course… ‘The mission’ (Gabriel’s Oboe, The falls and On Earth as it is in Heaven). Special mention deserves the vocal part with a wonderful Dulce Pontes that thrills us with the weeping of her throat, and a voice that trespasses our skin singing songs of ‘Sostiene Pereira’, ‘The end of a Mystery’ or ‘Queimada’. ‘Aboliçao’, belonging to this last movie, looks especially beautiful thanks to the intervention of a magnificent choir that goes in crescendo and completely gains the favor of the audience.

The orchestra -and I did not expect less- is superb. Perfectly plastered, with a captivating sound (amplification problems apart) and musicians who have given all their best and have immersed themselves in the music, forming a single being each with their instrument. And what about Maestro Morricone? He has conducted sitting in a chair, because he is already 90 years old, and he has been sober, precise, elegant, and committed to his music, to his musicians, and to his audience. And humble, as only the big maestros are.

When we are closely arriving to the three hours of concert –intermission included– the end of the concert is sublime. What a better way to finish than with the performance of ‘On Earth as it is in Heaven’ with the choir singing “gloria/glory” as the last word and the music suddenly ceasing? And also, with all the audience standing cheering, applauding, whistling, and acclaiming that final glory. Three encores: a beautiful and delicate ‘Cinema Paradiso’, again The Ecstasy of Gold with Susanna Rigacci and ‘The end of a Mystery’ with Dulce Pontes. We are all ecstatic and happy, each humming a piece, knowing that we have been fortunate to be there.

Thank you very much, maestro Morricone.

Over time, one reaches a certain age in which one feels old for a massive event of this type: lots of public, people eating pizza, drinking beers, and ladies behind you commenting during the concert (“Morricone is looking old, isn’t he?”). And what’s worse is being the concert in a large pavilion and having to use amplification, which, at least for me, produces the annoying sensation of listening to a recording of the music and not to the orchestra itself playing live. In addition, it seems that correctly balancing/equalizing the sound is not so easy or is not possible for any technician, because in this concert, there were moments when the bass saturated a little (especially in the first part, but not so much in the second part).

The event took place at the Bilbao Exhibition Center – BEC (actually located in the Biscayan town of Barakaldo) in a pavilion more suitable for pop and rock concerts. The ideal would have been to hold the concert in a theater in Bilbao such as the Euskalduna Palace, but the capacity is much smaller and it was necessary to fill with as many people as possible to make it profitable (the venue was practically full).

Talking about the concert itself, this was performed by the Orchestra Roma Sinfonetta, with Morricone leading it, who conducted the orchestra sitting (perfectly understandable with his advanced age). The choirs were composed by the Coro Talía and the Nuovo Coro Lirico Sinfonico Romano & Coro C. Casini dell’Università di Roma Tor Vergata, both directed by Stefano Cucci, with the solo performances of the soprano Susanna Rigacci and the fado singer, Dulce Pontes. The program consisted of a good selection of Morricone’s hits, combining the music of both Hollywood and European movies. It is curious how, despite of his vast production, his concerts always consist more or less of a fixed repertoire of themes that vary from one act to another.

On this occasion, the concert started with a suite that was called “Historical Epic”  with the title of ‘The Untouchables’ (which sounded a bit noisy, probably due to an amplifying problem), and was followed with a couple of tracks from ‘The Red Tent’ (no problems in this piece) that immersed us in unequivocal “Morricone’s musical aroma”.

He continued with the excellent ‘Novecento’ and a long suite of ‘¡Átame!’, perhaps a not very known collaboration of the composer with Almodóvar, although it is a remarkable soundtrack.

Then the extra-cinematic theme ‘Ostinato ricercare per un’immagine’ came and a short piece of ‘Nostromo’. To perform this, Susanna Rigacci appeared on stage, a soprano and old collaborator of the Italian composer, always present in his performances, who remained on stage until the first part of the concert ended.

Next followed a suite of Sergio Leone’s movie’s themes, a block with the title of “The Modernity of the Myth in Sergio Leone’s Cinema”. A block, personally, somehow disappointing. It started with ‘The man of the harmonica’ of ‘Once Upon a Time in the West’, where the harmonica has a great prominence (of course), performed in a version lacking the force of the piece as we know it. Then we had three pieces of ‘The good, the bad and the ugly’, where for the main theme we had a concert version (the one that is always performed) that loses the grace and burlesque tone of the original one. Prior to this, we had the theme ‘The fortress’, and to close the first part of the concert, ‘The Ecstasy of gold’, one of the star themes of the Italian composer. Nothing to object to this performance, which was good closure for the first half, a piece that is very well-known, very powerful, and looks unbeatable live.

After the break, we continued with the westerns, in this case with ‘The Hateful Eight’. The Oscar winner could not be missed in the repertoire.

Following, a long suite included in the block called “Social Cinema”. Dulce Pontes took the stage to perform several themes. The first of them, from the Spanish film ‘The end of a Mystery’, with music benefited by the fado style of the Portuguese singer. Then, European cinema, with a great selection formed by ‘The Battle of Algiers’ (and its military rhythms); ‘Sacco and Vanzetti’ (again with Dulce Pontes, performing the song originally sang by Joan Báez); ‘Investigation on a citizen free from all suspicion’ (and its tragicomic air); ‘Sostiene Pereira’, with Dulce Pontes again in charge of the vocal part (here it was a song originally sung by her, as it was in ‘The end of a Mystery’); then we turn to ‘The working class goes to paradise’; to jump to American cinema with ‘Casualties of War’ (one of the masterpieces of the Italian composer, a tremendously emotional wonder that always gives me goosebumps); and to finish the block, an abrupt change of tone with ‘Aboliçao’ from ‘Queimada’, where the choir worked perfectly.

Closing the program, we had another classic, ‘The mission’, with three of the main themes, offering an excellent end to the second part of the concert. After this, the encores; three in total. First, one of the soundtracks we missed, the wonderful ‘Cinema Paradiso’. After this, two encores, ‘The ecstasy of gold’ and ‘The end of a Mystery’, so that the two solo singers, Susanna Rigacci and Dulce Pontes could shine again, I suppose.

As a summary, it cannot be said that it was not a good concert, since the orchestra and the choir were excellent and the selection of music was good, and it is always a luxury to see Ennio Morricone conduct live, and more knowing that, due to his age, each concert may be the last chance to see him. But I’m still a little bit annoyed by the amplified sound that on this occasion did not have enough quality. But it seems that it is a risk that cannot be easily controlled in a live concert for a massive public. 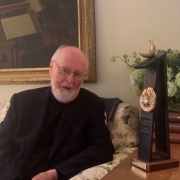