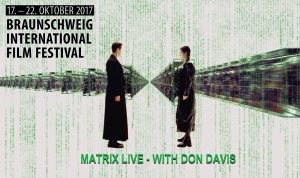 Today, Tuesday, October 17th, the movie Matrix (1999) will be screened at the Braunschweig International Film Festival (BIFF) – Germany, and will be done in a special way, with live music by the Staatsorchester Braunschweig orchestra conducted by its composer, Don Davis.

In addition, tomorrow Wednesday and also within the activities of the festival, Matthias Hornschuh will moderate a conference with Don Davis where they will talk about his works for movies like Matrix, Bound or House on Haunted Hill.