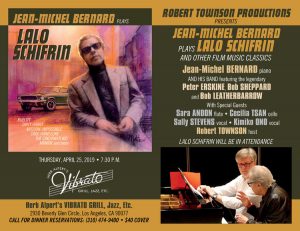 On Thursday, April 25th, there will be a tribute concert to Lalo Schifrin at the Herb Alpert’s Vibrato Grill Jazz venue in Los Angeles (California), where the French pianist Jean-Michel Bernard and his band (Peter Erskine, Bob Sheppard and Bob Leatherbarrow), along with the flutist Sara Andon, the cellist Cecilia Tsan and the voices of Sally Stevens and Kimiko Ono, will perform Lalo Schifrin’s music as well as other film classics.

The concert, which will be produced and hosted by Robert Townson, will feature Lalo Schifrin as a guest of honor.

VIDEO – The music of ‘Alita: Battle Angel’ with Tom Holkenborg

Michael Nyman’s score for ‘The Piano’ live with the London Contemporary...
Scroll to top