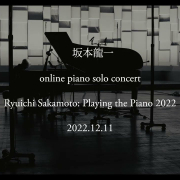 On December 11, 2022, Ryuichi Sakamoto’s solo piano concert will be streamed to the world.

Two years ago, with a difference of one day—in other words, on December 12, 2020— Sakamoto played a solo piano concert while the world was in search of light within the dark tunnel of the coronavirus pandemic. He played from a studio in Tokyo with no audience present. The performance was live-streamed but was not archived for future release.

This means that on December 11, Sakamoto will be returning for the first time in two years to show us Sakamoto in performance.

And now at this juncture, looking back on the past two special years, I cannot help but think about how special and difficult they must have been for Sakamoto and for each and every one of us.

When I think of this period that will be remembered as a once-in-a-lifetime occurrence, these lines from the poem “A Parting” by Chuya Nakahara comes to my mind:

I can recall everything

I can recall everything

But, what I can recall more than anything else

What I can recall more than anything else…

I most definitely cannot say

The length of the time, of two years, alone is long enough to both take away something from us and give something to us regardless of the situation we each may have been in. That said, the things that we lost/were given, differ in nature from those of any other two years. I am afraid to say, that these things might have hurt us deeper than we think. By what and why have we been hurt? I can only say, like Chuya, “No, oh, I can’t say.”

That aside, let’s go back to where we were two years ago: December 11, 2020, which was the day before Sakamoto’s live-streamed concert.

On that very day, he was told by a doctor in Tokyo that he had but six months to live. A new cancer that was found in him had taken over a significant part of his body. His physical condition was found to be far worse than anybody thought. I don’t think that the knowledge of his own physical suffering didn’t have an impact on his spirit.

Yet, without letting the people around him know about this situation, he went on to perform the one-night-only and live-streamed concert that was never archived for future use.

The sound recorded during the performance was released as an album titled Ryuichi Sakamoto Playing the Piano 12122020. It was released on December 12, 2021, exactly a year after the day of the live-streamed concert.

Considering that the studio chosen for the live-stream needed to take into account the use of MR (mixed reality) images that were also streamed live, the set-up did not necessarily provide an ideal acoustic environment. The doctor’s diagnosis on the day before must have also imposed an extraordinary amount of psychological challenge on Sakamoto. Yet, as incredible as it may seem, I believe that the resulting CD is a masterpiece that should be regarded as a miracle.

Around the time the album became available to us, Sakamoto was undergoing surgery to remove a cancerous tumor that had spread to both lungs. Over the past two years, he has been through six surgeries, both major and minor, and his battle with the disease continues to this day. The damage he has sustained is very severe.

This coming December 11, Sakamoto’s solo piano performance will be streamed in the form of a concert. However, what we will experience that day is carefully recorded footage of Sakamoto performing a few pieces of music each day over the course of a week, that was then thoughtfully edited together.

I learned about his situation when Sakamoto said to me, “I no longer have the energy to do live concerts… This might be the last time that you will see me perform in this manner.” I was so overwhelmed by Sakamoto’s straightforwardness that I was at a loss for words to reply.

However, I later came upon some thoughts. Perhaps he has accepted and sat with the reality that he is currently unable to do things that he once used to. Perhaps he has now planted himself firmly on the ground of this new reality necessitated by his physical condition, and is now trying to draw out a new drive and positivity from within himself.

In fact, it’s possible to say that the making of this “concert” had the conditions that allowed for him to do so.

I say this because, for one thing, the studio he used this time was very different from the one he used two years ago. This time, he performed in the legendary 509 Studio at NHK. Sakamoto does not hesitate in calling this studio located inside the NHK Broadcasting Center in Shibuya, Tokyo, “the best studio in Japan.” He spent ample time inside 509 Studio to perform and record this “concert.”

Additionally, for this occasion, a film team was created with key crew members brought in from New York. They filmed not with the intention of only streaming the footage online but to eventually edit together a concert film. They filmed Sakamoto in performance with great care.

None of this would have become possible if Sakamoto had had the stamina to perform a live concert.

The streaming will consist of about 60 minutes of his performance in the 509 Studio and the following 60 minutes will be a preview listening session of the entirety of his new album called 12 that will be released next year on Sakamoto’s 71st birthday (January 17). To further comment, this album of original music is composed of 12 new pieces of which some were made during his most difficult period of fighting his illness over the last two years. In a more general sense, this most difficult period for Sakamoto may have also been the most difficult period for many of us under the coronavirus pandemic. We might listen to the pieces, remembering these times.

“What I can recall more than anything else …/—No, oh, I can’ t say/I most definitely cannot say “

How will Sakamoto “say” through his music that Chuya did not “say”?

One more thing: the concert film that will eventually be released will be a conduit to revisiting our memories. A wonderful gift awaits us in the future.

In the spring of 2020 when everybody was living in fear over the spread of the coronavirus, I asked Sakamoto for a message of encouragement to the readers of the magazine I edit, to be included in a special feature I was putting together. Below is the message he sent in:

“As a person involved in culture, my one source of hope is the fact that art, music and poetry never once stopped over the 200,000 years of history that Homo sapiens have been around.” (From the July, August, September, 2020 collated edition of GQ Japan.)