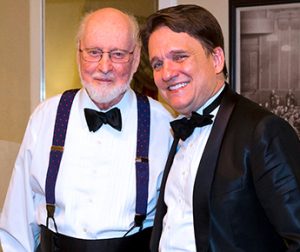 Today Thursday July 20th, a tribute concert to John Williams named “BBC Proms: Celebrating John Williams” will be held in London, performed by the BBC Concert Orchestra conducted by Keith Lockhart. This concert’s tickets are already sold out, although it is anticipated that last minute tickets will be released today at 9:00 a.m.; tickets that will surely be sold out again in a very short time.

But don’t worry if you don’t have a ticket, because the concert will be broadcast live on BBC Radio 3 from 7:30 p.m., while the TV broadcast will take place on Friday July 21 on BBC Four at 8:00 p.m.

The program of the concert is as follows:

Raider’s March from ‘Raiders of the Lost Ark’ (5 min)

Suite for Cello and Orchestra from Memoirs of a Geisha: No. 1 Sayuri’s Theme (5 min)

The Tale of Viktor Navorski from ‘The Terminal’ (4 min)

Prayer for Peace from ‘Munich’ (4 min)

Devil’s Dance from ‘The Witches of Eastwick’ (5 min)

Escapades (No. 3) for Alto Saxophone and Orchestra from ‘Catch me if you Can’ (5 min)

March of the Resistance from ‘Star Wars: The Force Awakens’ (2 min)

Concert in Badajoz with the Extremadura Orchestra and the Ziryab Choir conducted...
Scroll to top