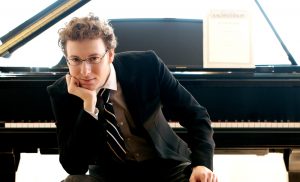 Middleburg Film Festival celebrated in Virginia 19-22 of October, will have Academy Award-nominated composer Nicholas Britell as this year’s Distinguished Film Composer. Today Saturday 21st, The Shenandoah Conservatory Symphony Orchestra will perform a selection of Britell’s most memorable scores accompanied by film clips such as: Battle of the Sexes, Moonlight, The Big Short, 12 Years a Slave, and A Tale of Love and Darkness.

During the concert, Nicholas Britell will perform two solo piano pieces and discuss his creative process between the musical selections. Directors Jonathan Dayton and Valerie Faris (Battle of the Sexes) will introduce Britell and John Horn will host the conversation with the composer Britell during the event.

Concert ‘The Best Epic and Science Fiction movies’ with the Excelentia ...