‘Honorary Mikeldi’ Award for Alberto Iglesias at the ZINEBI festival 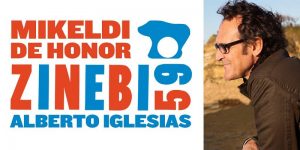 The 59th edition of the International Documentary and Short Film Festival of Bilbao (ZINEBI), which will be held from 10-17 of November and is organized by the Bilbao City Council, will award the Honorary Mikeldi to the San Sebastian-born composer Alberto Iglesias in recognition of his work.

According to the press release issued by ZINEBI: “Alberto Iglesias is a musician who who has managed to use his talent to reinforce the dramatic power of moving images, to put his extraordinary creative liberty and the emotional intensity of his musical scores at the service of some of the great film directors of modern times”.

The award ceremony will take place on Friday 10th of November during the opening gala of the festival, to be held on the main stage of the Arriaga Theatre of Bilbao.