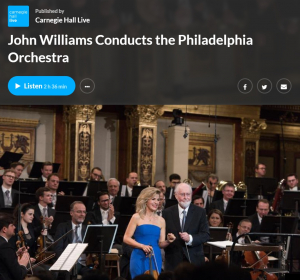 John Williams continues with his unstoppable concert schedule and after the concerts in Vienna, Austria (March 12 & 13), Philadelphia (April 19th), and New York (April 21st) today is the moment for a concert in Pittsburgh (April 25th).

But if you can’t attend tonight’s concert, don’t worry, you will be able to listen for free to WQXR’s radio broadcast of the gala benefit concert performed on Thursday, April 21st, at the Carnegie Hall in New York, where John Williams conducted the Philadelphia Orchestra and violinist Anne-Sophie Mutter.

Concert ‘May The Fourth Be With You – A Star Wars Celebration’ in...