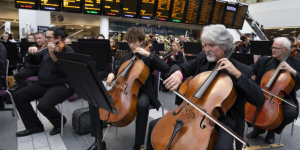 The City of Birmingham Symphony Orchestra conducted by Michael Seal will perform two very original free concerts on Friday, November 18th. The orchestra is up its instruments and moving out of the concert hall and into one of the UK’s busiest train stations, for two special pop-up performances in the heart of Birmingham at New Street Station.

There’ll be a mix of much-loved music from the movies, ranging from Star Wars to Pirates of the Caribbean, before a very special ‘encore’ which will offer members of the public the once-in-a-lifetime opportunity to step onto the conductor’s podium and take the baton themselves to conduct the orchestra playing John Williams’ ‘Imperial March’ from Star Wars (read more here).

The program will be: