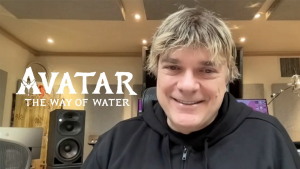 The composer and documentary filmmaker Ashton Gleckman has interviewed composer Simon Franglen on his music for the movie ‘Avatar – The Way of Water (2022)’.

“An interview with Simon Franglen, the composer of James Cameron’s new sci-fi epic, Avatar: The Way of Water! Franglen has had a career in Hollywood spanning back decades, working as one of the most sought after MIDI and synth programmers and score producers, working alongside James Horner on Titanic (1997) and Avatar (2009). We discuss his work on Avatar 2 including the new themes he wrote and working alongside James Cameron.”

Concert ‘Las Grandes Bandas Sonoras’ in Zaragoza with the JOBS

Candlelight Premium: Tribute to Ennio Morricone at the Eiffel Tower
Scroll to top