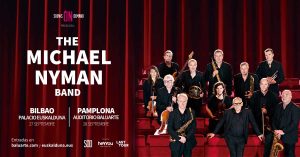 The British composer and pianist Michael Nyman, who has recently been to Spain with his European tour ‘The Michael Nyman Band: 40th Anniversary Tour’, has added two new cities to the show in September at the request of his fans: Bilbao and Pamplona in Spain.

The “Shows On Demand” platform has been the tool used by his fans to make this real, where anyone can request the performance of a concert of their favorite artist in their city, making the proposal a reality if enough support is achieved, as has been the case. The organization of the concerts has been provided by Last Tour.

Extraordinary summer concert with the Orchestra and Choir of the Cathedral of...