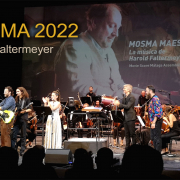 The article comes from the hand of our friend and collaborator Tony Alicante Spain, an expert in electronic and video game music, and a great connoisseur of Faltermeyer’s work. 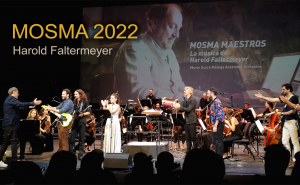 On Saturday July 9, 2022, and within the program of the Movie Score Malaga-MOSMA festival we had the opportunity to witness another unrepeatable concert, this time dedicated to Harold Faltermeyer. A concert with very good arrangements and orchestral mixes between the themes, giving the feeling of being very cohesive, and with the added value that it is a unique concert in its style in the mentioned festival. For me, without a doubt, the concert of the year, given the background of the composer honored: the German musician with varied and motley hits in the music market Harold Faltermeyer.

The concert began with a keyboard tune in the form of some variant of xylophone or similar and that is totally unknown to me… I guess for most of the attendees there (approximately 60% of the Cervantes Theater was full) as well. Suddenly appears an image of 2 men in a comic pose riding a vespino or mobilette type motorcycle and I’m thinking… it already has something in common with Top Gun where people ride motorcycles without helmets… Later I have been able to find out that it is the German film starring the popular comedian of the country in those years (1983) Dieter Hallervorden, Didi – Der Doppelgänger.

Searching the internet, there are references that the film was translated into Spanish as “Las locuras de mi doble” and in English also as “Non-stop trouble with my double”. The truth is that the film must be almost totally unknown outside its homeland because at least in Filmaffinity it has not only 0 reviews, but also 0 votes… and it will stay that way unless someone decides to start trolling it. I haven’t located it easily, and to be honest I’ve seen the trailer and it doesn’t appeal to me either. But the tune that played was nice and, in my case, unknown, and I always like to discover something new in any facet of life, including attending concerts. I liked this piece that was played in the concert much more than the one in an album, and I have to mention the great arrangements and the sound mix that was present in this unique and unfortunately unrepeatable event. 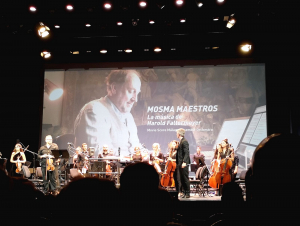 Let’s go to the second block and we have one of Harold Faltermeyer‘s most orchestral and ethnic scores. In his most prominent Hollywood years (between 1984 and 1992), Harold didn’t have the opportunity to work with an orchestra in a big production, and was pigeonholed as something like “the keyboard guy for the cop and thieve comedies”… something that did happened years later, in 2007, already working for German / Central-European productions.

The next suite was more familiar to me, pieces from Two Worlds (although unfortunately the screen was still showing images of Didi Der Doppelgänger). This was undoubtedly the worst point of the concert, the images in the background, out of sync with the music. Fortunately, it did not affect the most important thing, which is the music and the sound, but they are that complement that was not right on this occasion.

Focusing on Two Worlds, this is Faltermeyer’s soundtrack that I most recommend to fans; more classical and orchestral in style, where he proved his worth in the field. The concert suite ended with the song “Play the game” with strong symphonic rock arrangements.

Let’s go back to the more comical and synthetic genre with Fletch starting to play Diggin’ In and then the Fletch theme which, by the way, is probably the song I have heard the most in isolated listening. I love it and it still has me hooked, catchy as a worm, every time I put it on. Something like what happens to us with the snacks, unable to eat just one. On this occasion, for the concert it is worth mentioning that the pad beats were replaced by some wonderful strings. A video clip of the song was made and here I leave the link.

I recommend watching it because, as a curiosity, there is a total lack of coordination between what Faltermeyer plays with “his little machines” and what actually sounds.😉. 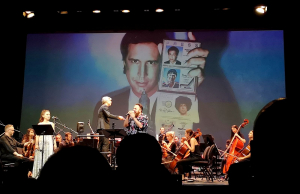 Then came one of the most intimate and darkest moments of the concert, as “The Running Man” had to be tackled. The suite started the other way around, with the song, of course, strongly changed from the original. Instead of being a powerful synth-rock track it became, thanks to the excellent arrangements by the Ferrando Brothers, a ballad with the orchestra restrained. The piece had several parts almost a capella, very well sung by Luis Regidor, to later give way to various mixes of several points of the score with the orchestra, more related to the action and the iconic leitmotif that carries that dark keyboard notation. Excellent this part! 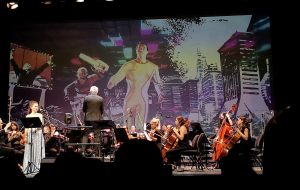 Then Tango & Cash’s “Let’s do it” was played with the leitmotif and several action songs. All good and all right. It is a delight to enjoy these emblematic themes, even if it is only once in a lifetime, with the orchestral accompaniment. Again very good arrangements!!

Next came “Thief of hearts”, one of the least successful and most unknown productions of the Simpson/Bruckheimer producer tandem. To tell the truth, it’s not a good movie, although it has an interesting script and plot, and I definitely think it deserves a remake. If everything had been at the level of the soundtrack, as it usually used to happen in those already distant 80’s with great songs and instrumental pieces, it would have been a great movie and not a fiasco as it was. By the way, a new edition with Harold Faltermeyer’s complete score has been announced, great!!! (although an official edition of Top Gun is still missing).

From this soundtrack the suite started with “Love in the shadows” well sung by Noelia Franco, to move on to a very well arranged hodgepodge where they merged, Passion Play, Stolen Secrets and the homonymous theme “Thief of hearts”. Here it is necessary to specify that the theme that coincides with the title of the film is a composition of his prestigious friend and king of disco music Giorgio Moroder, although it is produced by Harold, and for the concert it was again sung solvently by Noelia.

And from the female voice we switch back to the male voice for the compilation of songs from Beverly Hills Cop 1 & 2. The two central songs of each film respectively “The heat is on” and “Shakedown” were interpreted with the orchestra in rock key. They are great songs that put the energy into you, and it is a pity and a great loss that today hardly any original songs are composed for films that are totally identifiable, energetic, and powerful, something that was very common in the 80s. In the concert we were able to enjoy them, as well as several versions “cooked” with the orchestra as we had never heard them before, both of Axel F and other lesser-known pieces, due to the overwhelming fame of the main theme, but equally catchy as “Shoot out”. 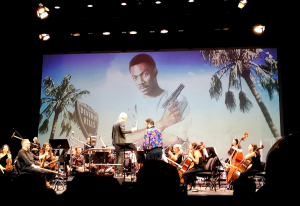 As the highlight of the concert we had Top gun, where Harold Faltermeyer finally came on stage at the piano to play the emblematic anthem of the franchise. And not only did we have such a solemn composition, but we also enjoyed a suite that was mostly based on the first title where, for example, the song Mighty wings was interpreted both in instrumental with the orchestra and also later sung. I insist in claiming that an edition of the score should be published (wink to Lalaland Records for example 😉…). Thus, and taking as a reference the names of the songs in some unofficial editions, we listened to “Goose’s death – Goodbye Goose” in a beautiful and grandiloquent opera version, female voice included. Also impressive was “Flying again” giving way to the best that was to come and shortly after when we had the Top Gun Anthem in all its splendor with the orchestra driving the second part of the melody with the participation of all the guitarists on stage. There are some videos on YouTube of the original guitarist of the tune himself Steve Stevens playing it live that are quite enjoyable, if you are passionate about the tune, look them up and don’t miss them! 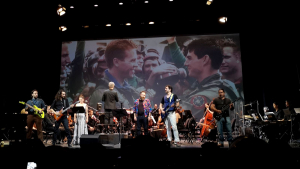 Then the Mosma Maestros award was presented to Faltermeyer, who acknowledged that it was the first time he had performed his music live with an orchestra, and then came the first and only encore of the night, the party finale…. Hot stuff, one of Donna Summer‘s many legendary songs. The first worldwide number 1 that Harold Faltermeyer obtained as a composer, which, although it is not a specific and original film theme, has been licensed several times in films. For example, in the scene when they start dancing the unemployment line in the hilarious movie “Full monty”.  And the concert finished masterfully fusing the theme on guitar with Axel F, giving rise to some final notes of an indelible concert. 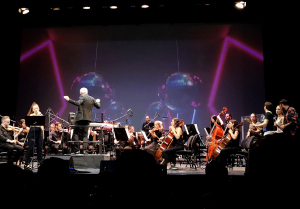 The worst: It was a unique concert, so the little details that could be blamed are completely forgivable, but it should be noted that at the beginning the synchrony of what was played with the background images was not adequate, and throughout the concert, the sound was perhaps excessively loud and saturated at times.

The best: The very fortunate orchestral arrangements, the exclusivity of the event, and the musical work itself.

Wrapping up, I would like to comment, as a Harold Faltermeyer fan, that he has written / produced very powerful songs, which are very unknown outside certain Teutonic circles: imagine songs like for example for the saga of films based on snow sports directed by Willy Bogner, etc… (great soundtracks and very difficult to get). Tracks like “Fire & Ice”, “Destination Unknown”, “Thunder & Lightning” or “Never give up” with Marietta Waters, or with Bonnie Tyler “Break Out”, “Say goodbye”, or with Deep purple “Fire, ice & dynamite”… just to mention a few examples. 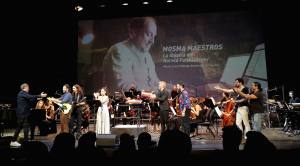 But back to the night at the Cervantes Theatre, to say that, in short, it was a unique and unrepeatable concert, so this exclusivity makes us to forgive the few mistakes experienced. The evening went by like a breath of fresh air, sensational!!!! 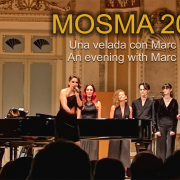 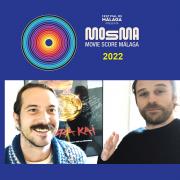 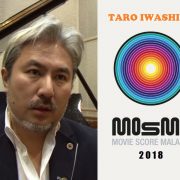