We continue with the second of these special articles dedicated to the cultural activities of the Princess of Asturias Awards 2020, where legendary composers Ennio Morricone and John Williams are being honored, with several special thematic concerts (read more).

On Saturday, October 10, the concert ‘Williams Club’ took place, reviewing some of the outstanding pieces composed by John Williams with influences from the Jazz genre.

Now can you read a special article written by the composer Pablo Laspra, Director of the “Oviedo FilmMusic Live!” festival, for the Asturian newspaper La Nueva España, that one more time, he shares with all of us in a collaboration with SoundTrackFest.

John Williams’ music has gone down in history as one of the leading composers of film music, but we should not underestimate his works for the jazz scene, which have been numerous and memorable.

The very young “Little Johnny Williams”, as he was colloquially known among jazz bands back in the 1950s, took his first steps in this musical field with another great maestro of soundtracks: Henry Mancini. Williams’ original piano riffs are the main theme of “Peter Gunn”, composed by Mancini, or also the piano part of “Days of Wine and Roses”, “Charade”, or even “Breakfast at Tiffany’s”, where he masterfully interpreted the famous theme “Moon River” (only in the original version of the score, and not in the CD edition that later became the soundtrack).

With these origins, it is difficult not to expect the great ease and versatility that he demonstrated with these songs. Because to compose good jazz, you have to be completely immersed in the style, and for that, nothing better than playing it.

The stages of his first clubs in New York, full of smoke and neon lights, inspired the scenery of this concert of the Princess of Asturias Foundation: a representation of some worn neon lights at the back of the stage accompanied the whole concert, while some spotlights and smoke gave a perfect atmosphere. 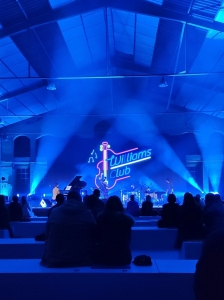 The pianist from Oviedo, Jacobo de Miguel, acted as master of ceremonies in this concert, being a regular in this style of music: his mastery of the piano and his management of improvisations delighted all lovers of the style.

The themes chosen were perhaps a little less affable than in the previous concert of the Foundation on Morricone, because jazz is a style sometimes difficult to understand due to its variety and hardness in some passages, especially the most extreme ones in terms of harmonies.

The concert opened with the piece “Honolulu Drive” from the film “Diamond Head”, performed with ease alongside De Miguel by the musicians Marcel Pascual, Horacio García, and Ethan Winogrand, and which served as a warm-up for what was to come, giving way to a theme with a repetitive ostinato on piano and bass in “Checkmate”, within a clear style of darker jazz. 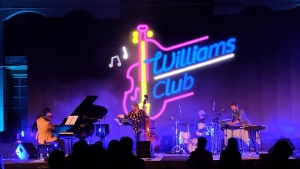 The piece “Banning back home” from the unforgettable film “Hook” by the late Robin Williams was developed in an easily heard style of jazz fusion made popular in the cinema by Dave Grusin (composer, among others, of “On Golden Pond” and the classic “The Goonies“). The incorporation of this style had its boom in many of the movies of the 90s, marking a classic style as far as soundtracks are concerned.

Finally, De Miguel and his group demonstrated their interpretative quality, their fluency, and versatility with the songs of “Catch me if you Can” and the famous piece “Cantina Band” from “Star Wars”.

It is a real pity that there are not more concerts throughout the year in this style that the Princess of Asturias Foundation is promoting these days: the clear acceptance of the public and the spaces available in the city, should favor that these events became habitual, in a city that clearly demands musical activities. 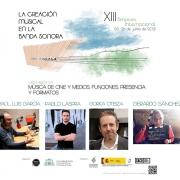