Film music concert in Beniarbeig with the Universal Chamber Orchestra 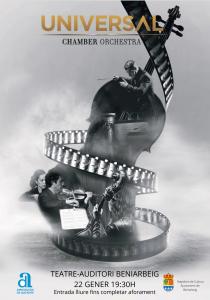 The Universal Chamber Orchestra, a chamber ensemble composed by 27 musicians from the Universal Symphony Orchestra, will perform a film music concert on Saturday, January 22, at the new Teatro Auditorio de Beniarbeig in Beniarbeig (Alicante, Spain), inaugurated at the end of 2021.

The concert, which will be conducted by José Martínez Colomina, and where the choirs Coral de Beniarbeig and the Coral Santa Ana de Ondara will also participate, will have the following program:

Tickets: Free – On a first-come, first-served basis – Read below

NOTE: The concert is free and no advance invitations will be distributed, as has been done in other events. On this occasion, you simply have to go to the auditorium, and half an hour before the event, the doors will open and you will be able to go in until full capacity is reached. If you want to have a place guaranteed, the audience is advised to go between 45 minutes and 1 hour before the concert and queue at the door.

Premiere of the ‘The Great Gatsby ballet suite’ by Carl Davis with the Czech...
Scroll to top