“Game ON!” – Symphonic Game Music in Concert in Luzern 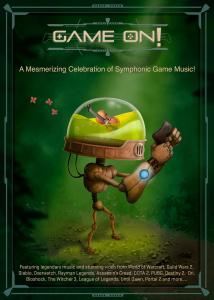 “League of Legends”, “Guild Wars 2”, “Ori and the Blind Forest”, “Bioshock”, “Assassin’s Creed”, “World of Warcraft” – these are just a few of the legendary video games whose sparkling soundtracks are brought into the concert stage light with “Game ON!” on Friday, March 25 at the KKL Luzern in Luzern, Switzerland.

While the 120 musicians perform exhilarating timbres, thrilling, never-before-seen game clips shine in HD on the big screen, and the musical director of “Game ON!”, Andy Brick, guides the concert evening with anecdotes as Master of Ceremony.