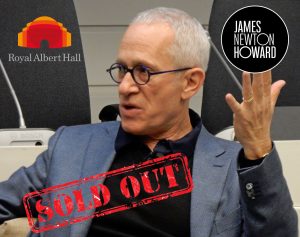 Tomorrow Monday, October 9th, BAFTA and the Royal Albert Hall, in association with PRS for Music, have organized a conversation with screen composer James Newton Howard about the creative process of composition. The tickets for the conference are sold out, but it is possible that as in other occasions, new tickets would be available tomorrow morning on the official page of the Royal Albert Hall.

However, there’re still tickets for the concert of next 3rd of November, where James Newton Howard will be performing his show at the Royal Albert Hall, in his tour “3 Decades of Music for Hollywood”.

Premiere of ‘The Phantom of the Opera’ in concert with music by Roy Bud...

Screening of ‘JANE’ documentary with live music by Philip Glass at the Hollywood...
Scroll to top