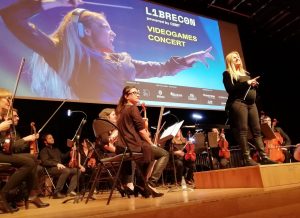 On Wednesday 21st, the fabulous Eimear Noone conducted the Bizkaiko Orkestra Sinfonikoa (BIOS Orkestra) to perform a classic videogames music program for the Librecon Videogames Concert, in front of an audience of almost 500 people in the A1 Hall of the Palacio Euskalduna Jauregia. It was a one-hour concert, which included music from games such as Sonic, Mario, Tomb Raider, Monkey Island, Final Fantasy VIII or Zelda.

Here you have some photos of the conference that Eimear Noone gave in LIBRECON on that afternoon, as well as the great symphonic concert of classic video games celebrated at night, which had SoundTrackFest in charge of technical direction and production, and that was organized by LIBRECON (ESLE and ASOLIF), with the sponsorship of Fitlearning by Systems Group, Systems, and Acorde Music Supervision.

Many thanks to Eimear Noone for her strength, her courage, and her involvement, critical to bring the concert to live! And many thanks also to the great Bizkaiko Orkestra Sinfonikoa (BIOS Orkestra) for their dedication and commitment.

SoundTrackFest also wants to thank LIBRECON for their bet to organize a videogames concert to open the congress, and especially to Eunate Ramírez de Miguel (ESLE) for pushing and believing in the project from the beginning. Also, the dedication, support, and determination of Valentin García (Lantik) have been key to taking this project forward, in the same way, that the great coordination and organization of all the technical details by Mikeldi Uribe-Etxebarria (Sergofi) has also been fundamental. And finally, thanks go to Asier G Senarriaga, who offered his help from the beginning, and was part of the team in-situ during the last days of production.

And so, after a long week of work, which was the last step of several months of intense production for the Librecon Videogames Concert, SoundTrackFest returns to normality, publishing daily news and special articles.