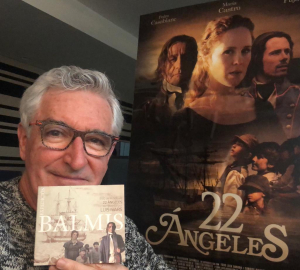 As part of the events of the 25th anniversary of the UMH-Universidad Miguel Hernández, the Faculty of Medicine will host tomorrow Thursday, April 7, the presentation of the album “Expedición Balmis”, with the soundtrack created by the composer Luis Ivars for the film “22 Ángeles”. An album in honor of the bicentenary of the death of the famous surgeon and doctor from Alicante (1753-1819), who led the Spanish Royal Philanthropic Expedition of the Vaccine (1803-1806), with the objective of bringing the smallpox vaccine to all the possessions of the Spanish Crown.

This presentation is in addition to the various events that have been held in the city of Alicante in memory of Balmis and that were interrupted by the pandemic, such as the Gala held at the ADDA in October 2019 (read more), which Luis Ivars directed and produced for the Regional Government and the City Council, as well as the academic event that the Faculty of Medicine held on December 3, 2019 entitled “Between science and fiction. Images of the figure of F.X. Balmis and the Royal Philanthropic Expedition of the Vaccine in audiovisual culture and literature”.

The event tomorrow, Thursday, April 7, will be at 18:00h and will begin with the intervention of the Professor of the History of Science, Enrique Perdiguero, who will contextualize the figure of Dr. Balmis. Then, the film composer Luis Ivars will present his creation accompanied by images of the film “22 Ángeles” and will make a symbolic delivery of the scores to the director of the UMH Youth Orchestra, which will perform it in the “25th anniversary” concert to be held on May 22 at the Palau de Altea in Altea, Alicante (Spain).

From its presentation, the album can be purchased through info@luisivars.com and will also be distributed on digital music platforms (http://www.luisivars.com/).

Soon we will bring you more information about this concert, but in the meantime, here is a couple of pictures that Luis Ivars himself has sent us in exclusive for SoundTrackFest.

Movie ‘The Godfather’ in Concert – 50th anniversary
Scroll to top