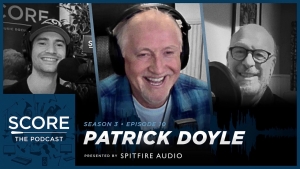 ‘SCORE: The Podcast’ continues its 3rd season with composer Patrick Doyle from Shepperton Studios in England, his home studio for 30 years. Patrick shares stories of many of his great scores including following in the footsteps of John Williams for Harry Potter and the Goblet of Fire, scoring and playing “Kevin” in Brave, diving into the Marvel Cinematic Universe with Thor, how he learned to put music to picture on the fly with his first movie ‘Henry V’, or his appearance as an actor in ‘Chariots of Fire’.

VIDEO – Composer Patrick Doyle learned how to put music to picture on the fly (2m 14s):

VIDEO: Hans Zimmer – Mix With The Masters
Scroll to top