This week the Facebook page of SoundTrackFest has reached… the 3,000 followers! 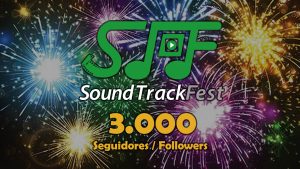 Step by step, big things are achieved, and that’s what happened on Thursday, September 20th, when SoundTrackFest reached the number of … 3,000 followers on Facebook!

Many thanks also to all the people that has collaborated writing articles such as Gori Martínez, Rafa Melgar, Curro Martín, Felipe Múgica, Jorge Ortiz, Antònia Pizà, Sergio Hardasmal, Frederic Torres, Juanjo Molina, León Esteban and Maria Borg, or helped in many other tasks like Diego Ruiz, Josep Ferré or Mikeldi Donibane Sanjuan, all of them under the watchful eye of Gorka Oteiza.

A few weeks ago we were celebrating the 2 years of the foundation of SoundTrackFest, and now it’s time to celebrate the 3,000 followers on Facebook, but we will surely have many more things to celebrate together in the future.

Pay attention in the following weeks, as there is an autumn season full of concerts and festivals coming, which begins right now with the first of them: Fimucité 12, where SoundTrackFest will be coming next week to give timely information about it.