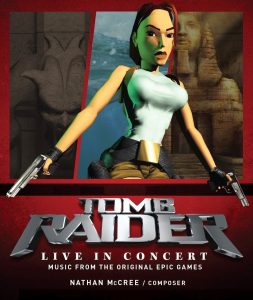 Relive the deadly adventures of Lara Croft with the original music composed by Nathan McCree for the 90s Tomb Raider games, performed by a full orchestra and choir along with visual clips from the original games.

The concert will have the presence of composer Nathan McCree and will include The Tomb Raider Suite, based on his original compositions from Tomb Raider (1996), Tomb Raider II (1997) and Tomb Raider III (1998) by Epic Games.

Shelley Blond, the original voice actress for Lara Croft, will be presenting the show live on stage, accompanied by Tom George (The Butler) and Alison Carroll (Lara Croft live model for Tomb Raider: Underworld). That way, as well as hearing the original music, fans will get to see the original Lara Croft telling the legendary Tomb Raider story. After the show, all the participants will be available for signings and photographs (VIP ticket required).

Premiere of the concert ‘La Dolce Vita – Fellini’s Universe’ in...