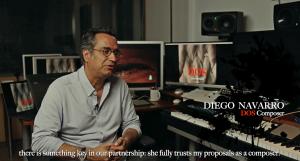 The composer and conductor Diego Navarro, has just published an extensive and very interesting video explaining the process of creating his latest soundtrack for the film “DOS” by Mar Targarona.

“After a huge work and a lot of love invested, I share the “making of” of the soundtrack of the film DOS, by my dear Mar Targarona, produced by myself. Last July 23rd we premiered our film in theaters, and the album with my score was released by the label MovieScore Media. Never before had I shared so many corners of my studio. It is a very personal piece in which we unravel the secrets behind the creation of my soundtrack for the film.

Many thanks to those who have accompanied me on this adventure. To my dear César Martín and Ciro Hernández of Socos Dúo and to the always fantastic Sergo Méndez for such an exquisite work.

From the bottom of my heart, I hope you enjoy it!”