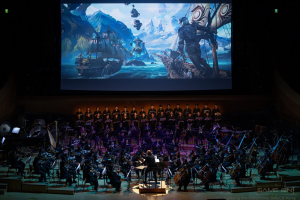 The Hallé Orchestra conducted by Andy Brick and the Hallé Youth Choir led by Stuart Overington, will bring video game music to The Bridgewater Hall in Manchester, UK on January 21st, with the concert ‘Game ON!’.

The concert will explore the extraordinary world of video games and the exciting music which has become synonymous with this globe-conquering genre. The full forces of the Hallé will perform music from some of the best-known game franchises in the world, as brand-new HD clips of the video games are shown on the big screen

The concert will include music from the epic universes of Assassin’s Creed, Guild Wars 2, The Witcher 3, Civilization, World of Warcraft, Ori and the Blind Forest, BioShock, League of Legends, and many others.

Where: The Bridgewater Hall (Manchester, UK)