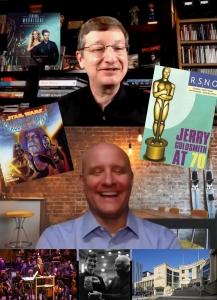 Maestro Steven Allen Fox (Founder and Conductor of the Golden State Pops Orchestra) has interviewed prolific and world-renown film music producer, Robert Townson, to talk about his career, how he made his way into the industry and to Varese Sarabande Records, Robert’s passion for not only the music but the composers, some of the historic concerts he has produced over the years, and his vision for film music concerts and albums in the future.

You can watch the three-episode video-interview here: