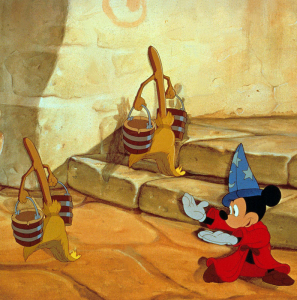 The Real Orquesta Sinfónica de Sevilla (ROSS), in active collaboration with the Teatro de la Maestranza in its common educational activities, will perform on June 11 and 12, under the baton of Alfonso Casado, the screening of Walt Disney’s film ‘Fantasia (1940)’ with live synchronized music.

Advised by scientists and backed by the presence of Leopold Stokowski conducting the Philadelphia Orchestra, Fantasia displays more than 500 animated characters in its 8 impressive musical cuts. Its bet was so far-sighted and visionary that, in fact, it was not until it was re-released in 1969 that it fully succeeded.

If there is a film that has spread the love of music to several generations of viewers, that film is Fantasia: Innovative, different, developing a new language of pure musical animation, which has just turned 80 years old. A powerful cinematographic and sound experience through a film, whose splendor does not expire.

NOTE: There will be performances for schools on June 8, 9, and 10 at 11:00. Tickets have a single price of 7 €. More information and application form: