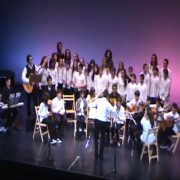 The Elemental Conservatory of Music “Vicente Sanchís Sanz” of Isla Cristina (Huelva – Spain), has organized the 7th edition of the International Soundtrack Contest for elementary students of music, whose final phase will be held at the Municipal Theater Horacio Noguera of Isla Cristina, this Saturday, March 25th from 9:00 a.m. to 2:00 p.m. (free admission). 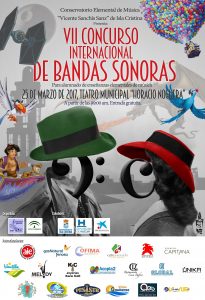 This competition is open to all students enrolled in the Basic Elementary Education of the Music Conservatories of Spain and of the Portuguese Algarve during the course 2016-2017, and began its first phase in early 2017 through the online presentation of some videos by the participants, to culminate the second phase this Saturday 25th, where the finalists will play their pieces live in the Municipal Theater in front of the public and in front of a jury.

The performances will be carried out in one of the following modalities: soloist (accompanied by recorded music or by a teacher), chamber group (maximum 10 components without director), and musical groups (more than 10 components, with or without a director), and will play music that appears in audiovisual medium, movies, series, advertisement, etc., with a maximum of 5 minutes, except musical groups that will have up to 7 minutes.

This VII edition has a total of 55 finalists, including for the first time the participation of young Portuguese musicians, along with a high number of Andalusian participants and especially, from the province of Huelva, which can be enjoyed live next Saturday.

The jury will evaluate both the performance and the staging of each of the participants, distributing a total of 23 prizes that will total more than € 4,000 and will be delivered at the end of the event.

You can see additional information and complete contest rules in: (read link)