Blog - Latest News
You are here: Home1 / Concerts2 / ‘Concert for the family’ in Huelva (Spain) 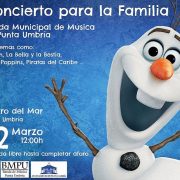 The Band of the Municipal School of Music of Punta Umbria will offer tomorrow Sunday 12th of March at 12:00 p.m. a ‘Concert for the family‘ at the Teatro del Mar in Punta Umbria (Huelva – Spain).

The idea is to try to bring the music to the whole family, through a selection of themes from children’s films such as Frozen, Beauty and the Beast, Mary Poppins, Pink Panther or Pirates of the Caribbean.

To emphasize the didactic and educational nuance of the concert, members of the band will present the different instruments that are part of the musical ensemble to the audience in the pauses between the pieces, and the attending children will be able to play the instruments and even direct the band.

The concert will have free admission till full capacity of the Teatro del Mar is reached (estimated in 486 seats).

Concert ‘Musicals of your life’