Blog - Latest News
You are here: Home1 / Concerts2 / Concert ‘Musicals of your life’ 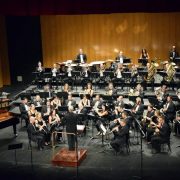 ‘Supercalifragilisticexpialidocious’ and other pieces from ‘Mary Poppins’ (Robert & Richard Sherman)

During the choral part, the soloists Paula Reyes Cruz and Cristina Gutiérrez Morales will sing some of the themes.

Tickets, with prices between € 4 and € 10, can be purchased at the following link:

‘Concert for the family’ in Huelva (Spain)
Scroll to top