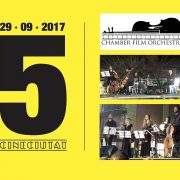 On Friday, September 29, 2017, several cultural events were held to commemorate the 5th anniversary of CineCiutat in Palma de Mallorca (Spain), including a free film music concert that was performed by the Chamber Film Orchestra (read news).

In May 2012, the Renoir theatres of Palma located in s’Escorxador, the old slaughterhouse of the city, closed their doors. It was the only cinema that projected only and exclusively original version movies with subtitles. Fortunately, a group of fans carried out a ‘citizen action’ to recover the iconic space. Only a few months later, Xarxa Cinema (‘Cinema Net’, translated into English) was constituted, an association in charge of managing the new cinema that was named CineCiutat. Since then and every July (the official date of the reopening) a party has been celebrated to commemorate this event.

This 2017 the celebration took place on September 29th. Theater and music have been combined in a series of free events that have brought together a large number of public, usual or not from CineCiutat.

One of the events was the concert of the Chamber Film Orchestra that played a varied program dedicated to soundtracks. Although the outdoor stage was not the best place to fully enjoy the music (excessive noise, dazzling spotlights, the bustle of the people) the audience enjoyed the concert. The selection of the well-known pieces, together with the professionalism of the seven musicians, encouraged an evening that had a pleasant weather. 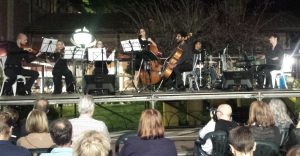 In the pieces played, there was only one that was not composed expressly for a film, although it had been part of “Mommy” directed by Xavier Dolan. This piece is ‘Experience’ by Ludovico Einaudi, from the album ‘In a Time Lapse’, published in 2013.

A little more than sixty minutes after starting, the small orchestra finished its performance, leaving the group without the usual encore.

We hope we can celebrate many more birthdays at CineCiutat and with CineCiutat. 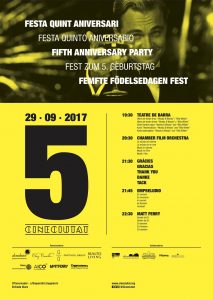 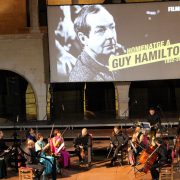 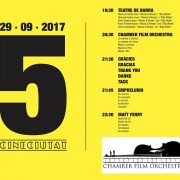