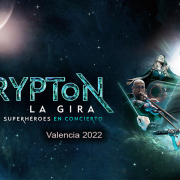 One more year, the Film Symphony Orchestra is going all over Spain with a new tour: Krypton, dedicated this time to the music of heroes and superheroes (read more).

Our colleague and collaborator Frederic Torres attended the concert held in Valencia in October and leaves us this great summary of it.

Once the new tour dedicated to “Heroes and Superheroes”, called Krypton, began in September at the Auditorio Nacional de Madrid, just inaugurated in October, the Film Symphony Orchestra arrived in Valencia, the city of origin of this orchestral formation specialized in performing film music, which under the baton of its incombustible conductor Constantino Martínez-Orts, has been gaining more and more followers and popularity, to the point of selling out practically all the tickets for the concerts planned in each of the cities of its tours (and there are quite a few, some even repeating event, such as the capital of the Turia, where they will return in February).

Surely, the continuous appearances in the program El Hormiguero, hosted by Pablo Motos in a well-known private TV channel, and even in the news of national programs such as RTVE’s La 1 (on October 1st itself, in the midday edition), have played their role. But also the idiosyncrasy of the show itself that Martínez-Orts has conceived, a combination of color and staging as characteristic as recognizable, already commented on more than one occasion in articles referring to previous tours.

In this case, in addition (it is worth remembering that Krypton was the home planet of Superman, in case there is anyone who does not know), these characters, already colorful thanks to their colorful costumes, initially conceived for the comics (and of which I give a full account in the book LA MÚSICA TRAS LA MÁSCARA. THE SUPERHEROIC ERA -Vol. 1-, if I may be permitted the license – read more), the preparation of lights and colors that goes with each FSO concert seems much more appropriate to exploit the thematic showiness of a program full of fanfares, but also of classical overtures such as those dedicated to El Cid, by Miklós Rózsa, Lawrence of Arabia, by Maurice Jarre, or Braveheart, by James Horner (from which the love theme was chosen). In other words, the usual combination of classical and contemporary themes that the Valencian conductor usually presents in his programs. A formula that has proven its success on countless occasions and that, for obvious reasons, Martínez-Orts does not intend to vary one bit.

Thus, the two were alternated in a balanced way, so that the showy opening with the Rozsian overture, much more difficult to interpret than it may seem at first glance, since it is very difficult to get the right tempo (as can be seen in the various re-recordings made in the last twenty years, which suffer from these capabilities, especially the one conducted by James Sedares), as well as to recreate the energy that was invested in the original recording made by the same composer of Hungarian origin, was followed by the majesty of the overture that Danny Elfman composed for his imperishable Batman. Another piece of very difficult recreation, given the technical complication of the original arrangements of that pioneer of film music who was Shirley Walker.

In both cases, the orchestra offered a lower register than the original, due to the low profile given to the cymbals and the snare rolls, so fundamental in these two pieces. Quite the opposite of what happened with the brilliant presentation of Christophe Beck’s Ant-Man, in which the FSO knew how to live up to the dynamic composition of the young Québécois composer, one of the best new generation Marvelite themes, provided with a verve and an infectious jazzy rhythm, well matched with the rhythm section.

Quite the opposite of what was offered shortly after with the theme of Iron Man 3, by Brian Tyler, which was again interpreted in a symphonic register instead of the jazzier register of the magnificent end credits that could be seen/heard at the end of the film (and also of the previous tour, FÉNIX, by the same FSO). A pity, because the theme is probably the best thing composed by this composer, who since he broke with Marvel, has not regained the inspiration that characterized him in the beginning.

In this regard, priceless the explanation, as usual in his shows, of Martínez-Orts himself, when he confessed that he selected this theme from among the several existing ones about the Golden Avenger, at a time when Marvel did not quite define coherently its characters from a musical perspective, because he did not like the other two. That’s all. In between, the aforementioned theme “For the Love of a Princess”, a lyrical-amorous melody by James Horner, belonging to Braveheart, included in the program despite having stated in the introduction that the day was going to run around the superheroic epic, and that this was not the place or the right time to listen to love themes. The end of the first part ran between symphonic overtures by Michael Kamen, who played Robin Hood: Prince of Thieves; The Dark Knight, by Hans Zimmer, transcribed for orchestra, given its original electronic condition, and, again, Tyler, with the sequel to Thor, named The Dark World, as well as the brilliant march by Alan Silvestri for Captain America: The First Avenger, ending by the hand of the great Michael Giacchino and his brilliant score for The Incredibles as a true jazz recital. An unbeatable finishing touch to put a period to the concert.

After the intermission, in which the usual raffle was held for two people to Hollywood, with the interpretation of ten themes, at a rate of five seconds each, so that whoever guessed correctly could access the prize, the second part continued along the same lines. To Jarre’s majestic Overture dedicated to Lawrence of Arabia (again the pedagogical introductions of the headliner, Martinez-Orts, led him to whistle even the popular march from The Bridge on the River Kwai, to explain that it did not belong to the original score by Malcom Arnold, the composer of David Lean’s previous film), and the theme from The Last of the Mohicans, by Trevor Jones, well known to veteran film music fans, the program included the main theme from Spider-Man 2, by Elfman, because according to Martínez-Orts (with good judgment), it is better than the first (presumably because it incorporates the stupendous theme dedicated to Doctor Octopus).

After a suite dedicated to Conan the Barbarian, the increasingly mythologized score by Basil Poledouris, in which there was an opportunity to hear the hammering on the anvil as it happened in the original recording, Horner was summoned again, this time through his score for The Mask of Zorro, in which the members of the FSO, in addition to playing their respective instruments, played the role of clappers in order to provide Latin rhythms to the expository development (in which the intervention of a Spanish soloist guitar was missing).

The concert entered its final stretch with a spectacular crescendo featuring the main theme of Captain Marvel, by Turkish-American Pinar Toprak, which sounded vibrant, and then a suite from Zimmer’s controversial score for Man of Steel, in which a backup electric guitar was used to enhance the fidelity of the ensemble.

After these two accomplished moments, came Silvestri’s iconic and powerful theme for The Avengers, perhaps the best known of all the Marvel movies, well executed in its just over two brief minutes of duration, before tackling the apotheotic suite dedicated to Black Panther, the justly Oscar-winning score in 2018, composed by the Swede Ludwig Görannsson. In it, the FSO’s interpretation shone with its own light (and not external, as the paraphernalia of colors and steam engines that this formation is accustomed to employ in recent years to emphasize the show might lead one to believe), incorporating special percussion (for example, the talking drum used in the original recording of the film), and chants of African characteristics interpreted by the moonlighting components of the formation, which even generated some feints of dance among the audience.

The encore, with the inevitable march of Superman, by Williams, and the closing of the performance with the “Cantina Band”, also by the American composer (which is always the number of the final conclusion of the FSO concerts), put an end to the show, in which from the first minute, Martínez-Orts asked for the collaboration of the public to record with their cell phones some of the interpretations or special moments, to then upload them to social networks. The opposite of what is usually requested in concert halls. But the FSO and its owner already have their proposal, and this includes music, yes, but also many other things, among them, the participation of an enthusiastic audience that is shrewdly urged to participate in the show, with obvious results. One may agree or disagree with the approach according to one’s own music-loving demands, but it is clear, in spite of the steam and the lights that occasionally do not let one see clearly the execution of the pieces, that Constantino Martínez-Orts knows what he is doing. That is indisputable. 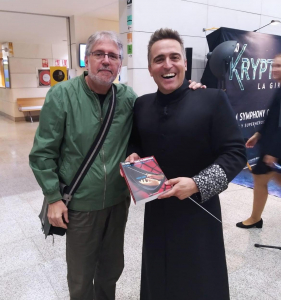 Article and pictures by Frederic Torres 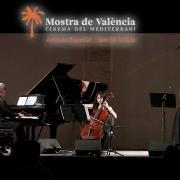 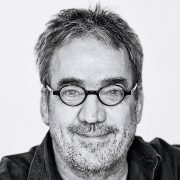 The Nightmare Before Christmas in Concert in London with Danny Elfman –...