The 19th edition of the World Soundtrack Awards festivities in the cozy and welcoming city of Ghent, Belgium, took place during the past weekend, on October 17-18, 2019. As always, the program featured interesting talks and top notch concert performances, celebrating both a larger body of work (Marco Beltrami) and many current film composers.

On October 17, two lengthy composer seminars took place at the Kinepolis cinema (center of the Film Fest Gent). In the first one, Marco Beltrami was interviewed by dr. Martine Huvenne, a musicologist specializing in contemporary music, who focused a lot of her attention on Beltrami‘s more serious films (the works of Tommy Lee Jones in particular) and oddly failed to discuss his more widely known scores for big Hollywood films like Hellboy, I Robot, or the Die Hard movies. 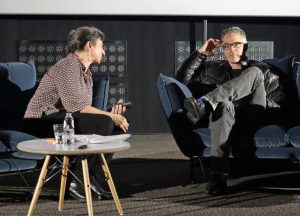 There was indeed much more energy and traction in the following talk with Hildur Gudnadottir, which was wittingly conducted by former 20th Century Fox music exec Robert Kraft. Gudnadottir explained her approach to film scoring in general, but of course with a focus on her recent success with ‘Joker’ and ‘Chernobyl’.

In the night of the Thursday program, the Brussels Philharmonic and conductor Dirk Brossé offered a wonderful concert devoted to ‘Hollywood Nightmares’. The varied and interesting repertoire here ranged from Franz Waxman‘s music for ‘The Bride of Frankenstein’ (not the expected ‘The Creation’ cue though) and ‘Dr. Jekyll and Mr. Hyde’, via classics such as Howard Shore‘s ‘The Fly’, John Williams‘ and Wojciech Kilar‘s versions of ‘Dracula’ to more recent works like Marco Beltrami‘s ‘A Quiet Place’. 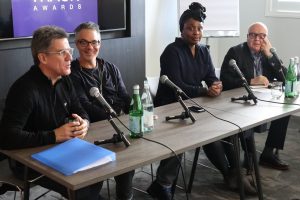 Apart from a ‘Meet and Greet’ with guest composers and various industry-related activities, Friday the 18th was largely dedicated to the evening gala concert featuring the World Soundtrack Awards. This featured two large sections devoted to the music of central guest Marco Beltrami, including newly arranged suites by Mikael Carlsson from films such as ‘The Homesman’, ‘World War Z’ and ‘Gods of Egypt’. The concert also featured a powerful performance of the song ‘Modeh Ani’ – a duet for contralto and soprano with a full orchestral accompaniment. Beltrami had written this for ‘Ben Hur’ but it was never used in the film, so this was a world premiere and real surprise for the audience.

Interspersed between the different musical sections were the handing out of the various awards, which went to:

The high level of musicianship showcased during the two concerts performed by the Brussels Philharmonic made both concerts highly enjoyable for fans and industry professionals alike. A bonus for many fans this year was that the event had many more high profile guests attending than expected, for example John Powell, Benjamin Wallfisch, Daniel Pemberton, and Michael Abels. 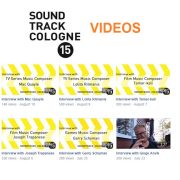