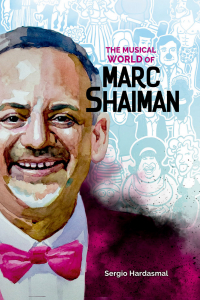 Our friend, collaborator, and IFMCA member Sergio Hardasmal, has published the first book in English dedicated to the career and the complete works of Marc Shaiman.

Originally, this book was published in 2020 in Spanish (read more) and has finally been translated into English by Alex Massana. At the same time, a second edition has been published in Spanish, updated, revised, and expanded.

This book features an extensive and rigorous work written after years studying the composer’s work, presented in a pleasant and simple style, analyzing the music and its use with the image. Movies, musicals, tv series, single songs for ceremony galas and pop stars, pilot episodes or even the Castle Rock logo… everything has been analyzed in detail, including in some cases opinions of the composer himself and his collaborators, after detailed research, and analysis of lots of interviews published in magazines and specialized media. All possible aspects of Marc Shaiman’s career are included in the book: as a composer, as a lyricist, as an actor, and more… 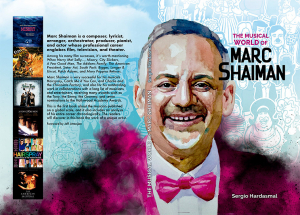 Inside the book and in the cover, you will find illustrations based on the characters from the films to which Marc Shaiman has put music, created by Andres Antunez. The artist Javier De la Cruz Garcia has painted a watercolor with the portrait of Shaiman, expressly for the cover of this book.

-His beginnings in music: When Marc met Bette…

-A Strong debut as a film composer in Misery

-Marc and Billy team up in City Slickers

-Shinning at the Oscars ceremony

-Adaptation and composition of Sister Act

-Stepping into legal drama in A Few Good Men

-In conflict with the songs in Sleepless in Seattle

-A challenge of a sequel: Addams Family Values

-Good intentions in Sister Act 2: Back in the Habbit

-From Saturday Night Live to Stuart Saves His Family

–Forget Paris: the romantic comedy according to Billy Crystal

-Patriotic sounds in The American President

-Bigger than the film in The First Wives Club

-Back to drama in Ghosts of Mississippi

-Overwhelming inventiveness in George of the Jungle

-Out of the closet in In & Out

-An unprecedented gem: My Giant

-The power of friendship in Simon Birch

-A remake in The Out-of-Towners

-Setting the tone in Jackie´s Back! and South Park: Bigger, Longer & Uncut

-A softer Shaiman in The Story of Us

-A South Park for Christmas, Bedazzled and the rejection of Kingdom of the Sun

-Working with Disney in The Kid

–Get Over It and other small collaborations

-A disaster called One Night at McCool´s

–What´s the Worst That Could Happen? and reunion with Bette Midler -The love for the game in the 61* drama

–A theme song for Greg the Bunny

-From John Waters to Broadway: the Hairspray success

-A tribute to the American classical comedy in Down with Love

-A limited Shaiman in Alex & Emma

-Small contributions in Marci X and The Cat in the Hat

-Participation in the Oscar ceremony and Finding Kraftland

-Back to film with Flipped

-A family comedy for Billy and Bette: Parental Guidance

-Towards to the West End with Charlie and the Chocolate Factory

-Widowhood stories by Rob Reiner in And So It Goes

-Wedding time, a new song for Todd Solonz, a crowdfunding for Bombshell, and other collaborations –Hairspray on television

-Back to Broadway with Charlie and the Chocolate Factory

-Back to nominations in The Star and Mary Poppins Returns

-Hollywood in Vienna and selfless contributions to the cause

-Missing out on Billy Crystal, cameos, and many collaborations

-Saving the city in Hawkeye

-From film to the theaters: Some Like it Hot –Bros, a gay rom-com -Keep listening…

Selected filmography and other outstanding works

Broadway in Concert 2022 with the Orquesta y Coro Filarmonía (Madrid)