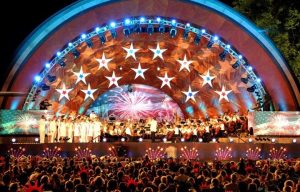 As every year, next 4th of July (Independence Day), “Boston Pops Fireworks Spectacular” will be celebrated in Boston, in a show performed by the Boston Pops Orchestra conducted by Keith Lockhart, with the participation of the U.S. Army Field Band and Soldiers’ Chorus, along with the Middlesex County Volunteers Fifes and Drums.

But the main event is the premiere of a new work created by Oscar Award winning composer Alan Menken and Tony Award winning lyricist Jack Feldman, called “The Sum of US”.

Where: DCR Hatch Shell on the Esplanade (Boston, MA)

Tickets: Free and open to public

Concert ‘An Evening with Burt Bacharach’ in Los Angeles