Comic to celebrate the centenary of the Bilbao Orkestra Sinfonikoa – BOS 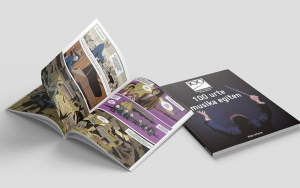 The Bilbao Symphony Orchestra – Bilbao Orkestra Sinfonikoa – BOS, which is celebrating its centenary in 2022, has presented this week the comic “100 years of music”, one of the projects it has developed during this year, together with the Olabeaga mural and the traveling exhibition that has toured Bizkaia, with the aim of offering a greater public diffusion of the orchestra and its ephemeris.

In the comic, created by the cartoonist Kike Infame, an imaginary baton, given in 1922 to the first conductor of the BOS, Armand Marsick, to conduct the first concert of the Orchestra and that passes from conductor to conductor until today, is in charge of telling us the history of the BOS. A story that relates the Orchestra to the society in which it was born and where it lives.

This comic will be distributed in town halls, conservatories, music schools and municipal libraries of Bizkaia, and is also available in pdf format on the website of the BOS.