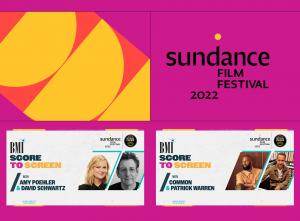 The 2022 Sundance Film Festival (online – 20-30 January) will host two virtual ‘Score to Screen’ panels organized by BMI – Broadcast Music, Inc, featuring conversations between Common and Patrick Warren and Amy Poehler and David Schwartz. Each discussion gives an inside look at the creative process of incorporating music in film while delving into the relationship between a composer and the film’s director or producer.

On January 22nd, Golden Globe and Emmy Award-winning actress Amy Poehler and esteemed Emmy and GRAMMY nominated composer David Schwartz kick things off with a candid discussion about their work on ‘Lucy and Desi’, which chronicles the life of the much beloved Lucille Ball and Desi Arnaz. The pair will elaborate on what drew them to the film, how they collaborated to interweave Lucille and Desi’s professional and personal lives, and so much more.

On January 23rd, the multi-talented GRAMMY and Academy Award-winning entertainer, Common, along with award-winning composer Patrick Warren, creators of the music for the drama/thriller ‘Alice’, will open up on how they each came to work on this project, taking viewers into the inner workings of the score for the film and elaborating on their creative process and beyond.