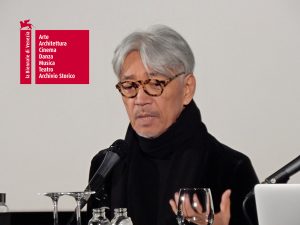 As the director said, “I had the title Coda in mind since the very beginning, as I wanted the film to land with a musical ending—with the birth of a new song.”

Ryuichi Sakamoto, who has been away from music for a while because of a throat cancer in 2014, that’s already cured, began to act and to compose film music with Merry Christmas, Mr. Lawrence (1983), winning an Oscar with his soundtrack for The Last Emperor (1987).

The composer attended Venice International Film Festival to present the documentary and has conducted interviews with several Spanish media, where he declares he regrets the work he did for Pedro Almodovar in High Heels (1991), as he didn’t get the spirit of Spain in his music. Interestingly, at the press conference offered at the World SoundTrack Awards in 2016, when SoundTrackFest questioned about that subject, Sakamoto commented that Almodovar rejected almost 40% of the music he composed for the movie, which he considered something usual

More information about the documentary:

Ryuichi Sakamoto at the World SoundTrack Awards 2016 in SoundTrackFest:

‘House of Cards’ in concert in Israel with Jeff Beal