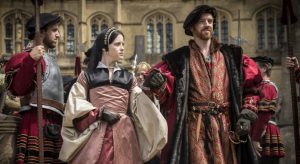 Now Debbie Wiseman and the Locrian Ensemble team up again to perform selections from her acclaimed score, alongside extracts from Wolf Hall and its first sequel Bring Up The Bodies read by Anton Lesser – who played Thomas More in the BBC series.

Two performances will be held, one tomorrow Friday 10th of November and a second one on 28th of January, 2018. In this second performance, a pre-concert talk with Debbie Wiseman will be held (free to ticket-holders, but which must be booked in advance).

Austin Wintory conducts the Fifth House Ensemble in a live performance of video...