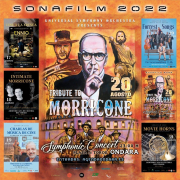 Today, Tuesday, July 5, has been the official presentation of the full program of the 4th edition of the film music festival SONAFILM, to be held from 17 to 21 August 2022 in the towns of Ondara, Denia, and El Verger (Alicante, Spain), which will be dedicated to the figure and career of the great Italian composer Ennio Morricone. 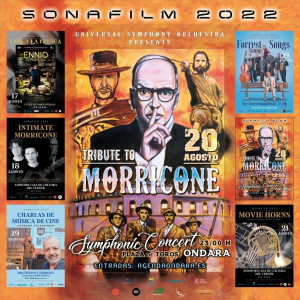 The presentation included the disclosure of all the posters, ticket sales links, and exact schedules of the events, and has been in charge of the three councilors of culture organizers of the Festival, Raquel Mengual (Ondara), Raul Garcia (Denia), and Miguel Pou (El Verger), together with the Artist Paco Chika, author of the painting that gives the image of this new edition, the respective representatives of Balearia and the Portal de la Marina Shopping Center as direct sponsors of the event and the Artistic Director of Sonafilm and Manager of the Universal Symphony Orchestra Javier Gil.

It should be noted that this presentation of the complete program was preceded by a concert on Saturday, May 14 at the Auditori “Valerià Gil” of Ondara performed by the Universal Chamber Orchestra, which included a short introduction of the evolution of the festival in these 4 years, the presentation of El Verger as the new organizing town along with Ondara and Denia, and other additional details (read more).

One more year, and as it has been happening since its first edition, SONAFILM has the support of SoundTrackFest, which will attend the festival and will bring you punctual information of what happens there.

While that moment arrives, we leave you with its complete program:

The festival will open on Wednesday, August 17 at the Plaza de Toros de Ondara, where completely free of charge, the public will be able to enjoy the recently released documentary “Ennio, the Maestro”, by Director Giuseppe Tornatore, filmmaker in love with the Italian composer and great close friend, who wanted to pay tribute to Morricone with this gem of a documentary with directors and artists likes Tarantino, Bertolucci, Oliver Stone, Bruce Springsteen, Clint Eastwood, Hans Zimmer, and John Williams among others. This event opens a new cultural section within the Festival dedicated to film screenings. 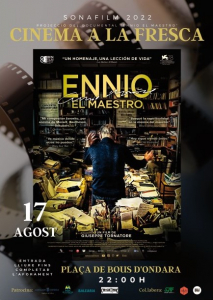 Thursday will give way to the first of the festival’s concerts, which will take place in the new town that joins this year: El Verger. The chamber hall of the Auditori de la Casa de Cultura will host the recital “Intimate Morricone”, which will offer a journey through the deepest and most distinctive melodies of the Italian composer, through the intimate and characteristic sound of the piano and clarinet, by the duo formed by the Aljub Artists clarinetist JM Santandreu (soloist of the Universal Symphony Orchestra and Yamaha Artist) and the prestigious pianist Christian Esteve. Free admission until the full capacity of the hall is reached (recommended to attend 30 min before the event to get a seat).

The Multiespai l’Androna located in the facilities of Balearia Port (Denia) will host the event “Film Music Talk” with Conrado Xalabarder, an expert in film music, creator and director of the web MundoBSO. An event aimed at all audiences, both students and film fans. Free admission until the full capacity of the room is reached (recommended to attend 30 min before the event to get a seat). 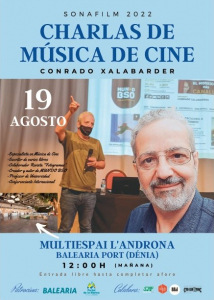 The Parc Torrecremada in Denia (entrance through the door of the c / Periodista Ricardo Ortega) will host the concert of the group Moanin’ Project, which like last year, will repeat the same band format with its 10 components offering a program of the best pop/rock of the 70s and 80s with the show “Forrest Gump Songs”. The concert will include the most popular songs that appear in this film, where apart from the famous soundtrack by composer Alan Silvestri we can find iconic songs by groups and performers such as Elvis Presley, Rooftop Singers, Bob Dylan, The Beach Boys, The Doors, Simon and Garfunkel, The Birds, Harry Nilsson, The Supremes, or Scott Mackenzi among others. Free admission until full capacity is reached (recommended to attend 30 min before the event to get a seat). 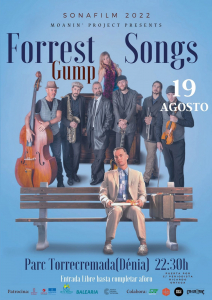 On Saturday, August 20, the “highlight” of the Festival will arrive, the long-awaited symphonic concert dedicated to the protagonist of this edition of SONAFILM, Maestro Ennio Morricone, performed by the Universal Symphony Orchestra with the participation of the Cor de la Rectoria. With more than 100 artists on stage among musicians and singers, all of them under the baton of the orchestra’s Chief Conductor, José Martínez Colomina, the audience will enjoy a beautiful symphonic tribute to the maestro’s Film Music where we will be able to listen to the music of some of his most famous Soundtracks such as “Once upon a time in the West”, “Novecento”, “The Untouchables”, “The Good, the Bad and the Ugly”, “Once Upon a Time in America”, “Cinema Paradiso”, “Chi Mai” or “La Califa”. The concert, which will last an estimated 2 hours and will be held in the Plaza de Toros de Ondara, will be the only concert of the festival that will have paid tickets, which can be purchased starting today through the platform www.agendaondara.es with a price starting at 20 € (grandstand or arena).

This fourth edition of the Marina Alta Film Music Festival – SONAFILM will close on Sunday, August 21, again in the Auditorium of the Casa de Cultura of El Verger with the recital “Movie Horns” by the impressive ensemble formed by 15 professional horns commanded by the horn soloist of the Universal Symphony Orchestra and manager of “Mira quina Trompa” Vicent Berbegal Coloma. This innovative chamber group formed by one of the most used instruments in film music, will offer a varied repertoire of soundtracks composed for the seventh art. Free admission until full capacity is reached (recommended to attend 30 min before the event to get a seat). 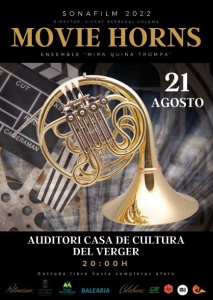 You can read more about the present and the previous editions of the festival here: 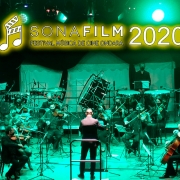 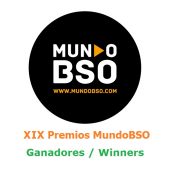 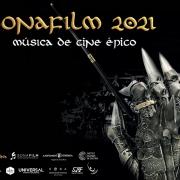 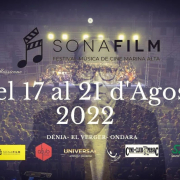 MOSMA 2022 – Full program of the festival
Scroll to top