Maybe the name of Drew Struzan is not familiar to some film music fans (“really??”), but he’s the man behind many iconic movie posters of the last four decades. To celebrate that he has turned 70 years old in 2017, a special tribute concert will be held this Friday, December 1st, 2017 – 8:00 p.m. at the Royce Hall, UCLA Campus (Los Angeles) with the music of many of the movies he has drawn for.

The concert, performed by the Golden State Pops Orchestra (GSPO) and Chorus conducted by Steven Allen Fox (Victor Pesavento Music Director & Choir Master Marya Basaraba), will feature more than 120 musicians and singers on stage, and will include beloved film music blended together with movies scenes and Drew Struzan’s artwork in this unique, one-of-a-kind, only in Los Angeles show! 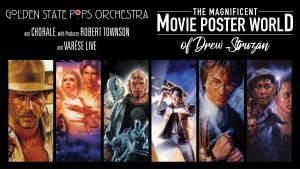 The program will include music from iconic movies such as Star Wars, Back to the Future, Indiana Jones, Hellboy, The Shawshank Redemption, Cutthroat Island, Police Academy, Beauty and the Beast, The Muppet Movie, An American Tail, E.T. and Blade Runner, among others surprises.

The event will have many special guests, some of them conducting the orchestra to their music and some performing, with the following confirmed attendees:

The event is produced and organized by the Golden State Pops Orchestra, Robert Townson and Varèse Live.

VIP tickets include a reception following the show, where you will have the opportunity to meet all the artists that have been part of this wonderful not-to-miss event! 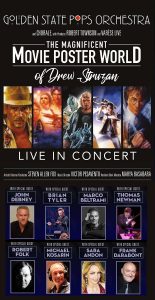 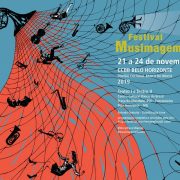