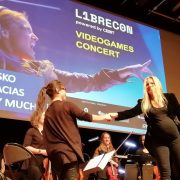 On Wednesday, November 21st, the LIBRECON technological congress held in Bilbao (Bizkaia, Spain), had the presence of composer and conductor Eimear Noone, who contributed with her music to the inauguration, offered a keynote/conference during the congress, and also conducted a symphonic concert dedicated to the music of old video games, performed by the Bizkaiko Orkestra Sinfonikoa (BIOS Orkestra).

Felipe Mugica,  a regular collaborator of SoundTrackFest, attended the concert, held at the Euskalduna Jauregia Palace, which featured SoundTrackFest in its technical direction and production, and tells us about his experience in this article.

These days it is no exaggeration to say that the videogame sector has become a perfect stage for composing soundtracks, without envying the composition for the cinematographic medium. The technological development both in graphics and in the possibility of adding fully orchestral music to accompany the players during the game, has given composers the opportunity to develop their talent through this creative form.

As a consequence of this, the initiative of the celebrating concerts has arisen, where fans of all over the world can listen to the music of the games that they have enjoyed during so many hours, performed by prestigious international orchestras.

This experience has also been extended to the world of old-school retro video games. In the past, the 8-bit technology did not give option to more than simple music with midis or electronics, but the work of innumerable nostalgic fans of these games has achieved that their retentive melodies are also performed these days by full symphonic orchestras.

This is where the concert that we could enjoy in Bilbao, at the Euskalduna Palace (Hall A1) on November 21st, can be set. Under the baton of Eimear Noone (a specialist in conducting large concerts of video game OSTs) and performed by a selection of musicians from the Bizkaiko Orkestra Sinfonikoa (BIOS Orkestra) (20 in total), a small but very select collection of old video game music pieces were offered. It could be said that it was a scaled version of the massive concerts that Eimear usually celebrates: reduced orchestral formation (strings, drums, some woodwinds…) and also tight duration, which was limited to just over an hour. 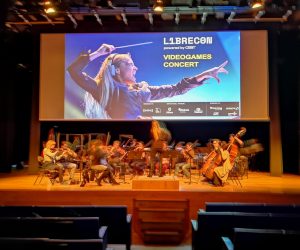 The concert was held within LIBRECON, a technological congress that took place those days in Bilbao, which made possible this event. LIBRECON promoted the concert, with the sponsorship of Fitlearning by Systems Group, Systems, and Acorde Music Supervision, together with SoundTrackFest in charge of the technical direction and production through Gorka Oteiza, who also co-hosted the show.

Talking about the concert, I have to comment that the musical themes were accompanied by images of each game; which helped not only to link music with the original work (and capture the nostalgic feeling of the audience), but also, perhaps involuntarily, served to show a reflection of the evolution of video games over the years.

The nostalgic factor and the complicity with the audience were sought from the beginning by Eimear Noone (who was, by the way, of a remarkable sympathy): when the first piece began, belonging to Sonic the Hedgehog (by Masato Nakamura), and she asked the attendees to sing the opening music of Sega’s console. 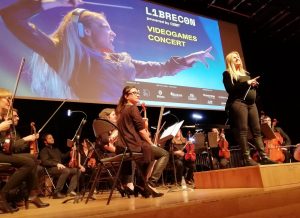 Past this funny beginning, a break and Noone presented a block of pieces with more classics: Monkey Island (Michael Land), Tomb Raider (Nathan McCree) and Chrono Trigger (Yasunori Mitsuda). In this case, and being compositions for adventure games, we had animated and cheerful music, very enjoyable to listen and very enjoyable even for those who didn’t know the pieces.

After another explanatory pause, it was the turn for one of the most popular music games (although it is a traditional Russian song), that is, Tetris; and the orchestral version that was played sounded great.

Next, the music of Mario Bros (Koji Kondo), one of the most enjoyable and retentive pieces of the evening; followed by the endearing music of Donkey Kong Country (by David Wise), which almost made the audience hum the themes that were being performed. 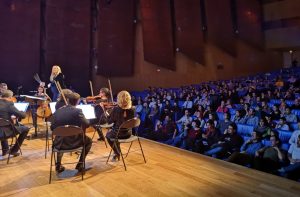 Following came Final Fantasy VIII-Liberi Fatali (Nobuo Uematsu), perhaps one of the most epic and also incidental themes of the concert, where the orchestra became a choir at the beginning, to start with the well-known “Fithos Lusec Wecos Vinosec” lines.

This was the end of the “official” program, but it was no surprise to any of the attendees that there would be an encore and that this would be, of course, The Legend of Zelda (Koji Kondo), not only because of the popularity of the video game, but also because of its epic and well-remembered main theme; an absence that would have been unforgivable in a concert like this.

And this was was how the evening ended, leaving a very good feeling among the attendees. Not only was the performance of the BIOS Orkestra (Bizkaiko Orkestra Sinfonikoa) impeccable, but the musical selection was also highly satisfactory, which combined offered a well-balanced and very entertaining concert; along with a tight duration, which did not give the possibility of saturation from the audience, and also having an adequate acoustics of the venue.

We have to add to the equation the sympathy of the conductor, Eimear Noone, who knew how to connect with the audience; and, finally, also, there was the complicity of the public thanks to the nostalgia effect. 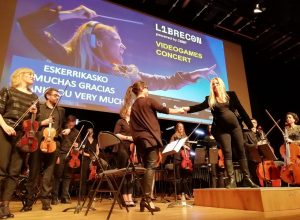 A very satisfactory experience, and therefore, we just have to hope there’s some continuity in the near future, so we can enjoy again events like this in Bilbao. 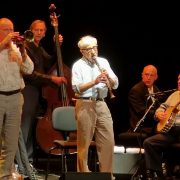 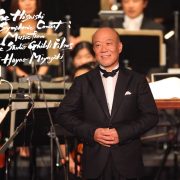 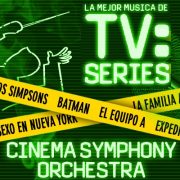 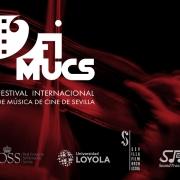 ‘EROS – Cine Concerto’ with Marco Werba and Valentina D’Antoni in...
Scroll to top