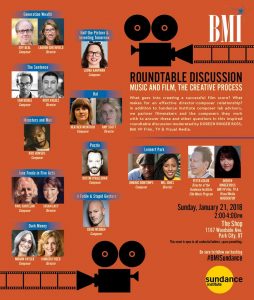 The Sundance Film Festival, the largest independent film festival in the United States, which is held annually in Park City (Utah), starts today Thursday, 18th of January and will be celebrated till the next Sunday, 28th of January 2018. During the festival, many film music related events will be held, being one of the biggest the ‘Roundtable Discussion’ organized by BMI (Broadcast Music Incorporated).

Tickets: Open to all credential holders

Didactic cycle ‘Old Cinema with New Music’ at the Royal Theatre in Madr...