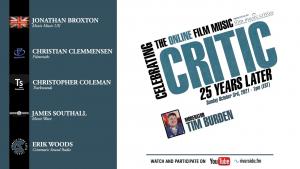 25 years ago, when the internet was in its infancy, a handful of film music review websites were established, pioneering online film music criticism with a new generation of writers and broadcasters who were taking advantage of this new medium for the first time.

Now, a quarter of a century later, the International Film Music Critics Association has celebrated a special event commemorating the dedication and longevity of five of these critics, with an anniversary round table looking back at the history of online film music criticism.

The event was streamed live on Sunday, October 3rd 2021, and now you can watch it here:

Tribute and award to Ennio Morricone at the Almería Western Film Festival (AWFF)...
Scroll to top