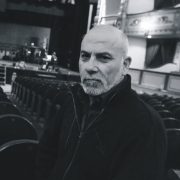 Composer and film producer Antonio Meliveo, nominated three times to the Goya Awards, will give a conference today Tuesday March 28th in Cordoba (Spain), called “You can also make cinema“.

This conference will open the ninth international “Month of March to Scene” organized by the School of Dramatic Art of Cordoba (ESAD), which will be held in its premises from Tuesday 28th of March to Thursday 6th of April, free attendance, and that this year will be centered on the world of cinema and theater.

In addition to this conference, several courses about theatrical writing and documentary film script are will be held today, which will include the workshop “How do you make a soundtrack?” by Antonio Meliveo.

Antonio Meliveo is a producer, director, musician and composer, with a long history in theater, cinema and TV, who has directed more than 80 stage shows and has composed the soundtrack of more than 40 feature films, TV series and short films.

‘Nosferatu’ movie in concert in Bilbao
Scroll to top