Blog - Latest News
You are here: Home1 / Festivals2 / Event – ‘Fans of Music from the Movies’ 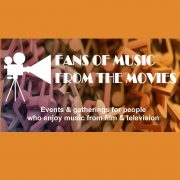 UPDATE (9/11/2016): Composer Trevor Jones has confirmed his presence at the event, as the fifth and last guest.

It seems that events related to film music are beginning to bloom, and after the recent Fans of Film Music (in its 7th edition), held in Los Angeles on September 3rd, now is the turn for a new event with a similar format in London: Fans of Music from the Movies.

Sponsored by Tadlow Music, Caldera Records, MovieScore Media and Silva Screen Records, on September 24th (Saturday), from 2pm to 5pm, the first edition of Fans of Music from the Movies will be held in Studio 3 – Angel Recording Studios – Islington (London).

James Fitzpatrick (Tadlow Music), will host the event, which will feature several composers in a lecture / panel that will be related to the world of film music, and will begin with an introduction by Tim Smith. 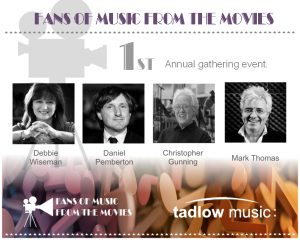 Although it is expected a fifth surprise guest to be announced soon, confirmed guests are 4 so far:

• Danie Pemberton (young composer on the rise, with works as Steve Jobs, The Counselor, Man from U.N.C.L.E. or The Awakening in his portfolio).

• Christopher Gunning (veteran in the world of film music with Big Battalions, When The Whales Came, Under Suspicion, Pollyanna, or Grace of Monaco for example).

• Mark Thomas (author of Shadows in the Sun, Tales of the Riverbank or Flicka 2 amongst others).

The event will last 3 hours, and will be divided in two parts, with a session of Q&A at the end of the second part, to be followed by a signing session with guest composers (3 signatures per person and composer).

At the end of the event there will be the opportunity to chat with the composers, and also to participate in a raffle of CDs donated by Caldera Records (Pollyanna, Under Suspicion and Rebecca, all of them composed by Christopher Gunning) and Tadlow Music (Is Paris Burning – Maurice Jarre, The Blue Max – Jerry Goldsmith and Epic Hollywood – Miklós Rózsa).

All necessary information to attend the event, as well as the possibility of buying tickets (at the price of 10 Pounds + management expenses) can be found at: http://info-aec.wixsite.com/fans-music-movies

We wish the event a big success, and may this first edition be followed by many others!!